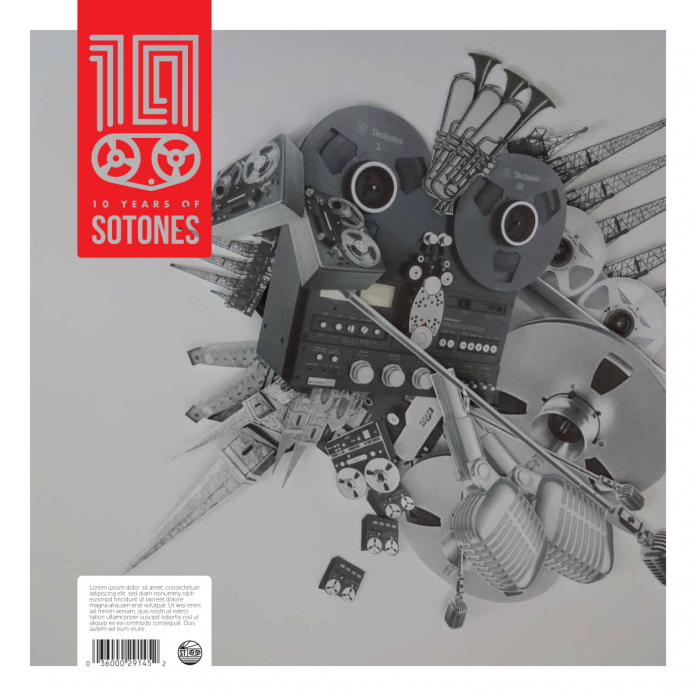 Label celebrates and Damian is impressed

Founded in 2007 in the industrial port of Southampton, Sotones is a not-for-profit indie co-operative label that promotes and releases music by a wide variety of artists. To celebrate this milestone the label has released it`s 85th release with an all new eighteen track compilation.

The release has entirely new tracks recorded by current and former Sotones artists.

The album kicks off with Fred Kinborn and Anja McCloskey`s “Also Available For Weddings” and at just over a minute in length it sounded like an air raid warning. Fred hails from Stockholm in Sweden and is a lap steel slide guitar player and singer, while Anja comes from Elmshorn, Germany is a half-German, half-American alternative folk musician singer and accordionist. Maybe not the greatest track to judge them both on. Next up we have Southampton`s own Band of Skulls and their cover of Bob Dylan`s “Times They Are A-Changin.” I really enjoyed this ballsy, sometimes distracted psychedelic version. The Skulls are currently a duo comprising Russell Marsden on guitar, vocals and Emma Richardson on bass guitar and vocals, drummer Matthew Hayward having departed. Definitely a band worth checking out.

Avital Raz follows with “The Only Time Jon Paid For Sex” and it`s a real cracker. I loved this catchy tune with some near the knuckle brutal but highly amusing lyrics. There`s some great lines throughout, including `Not a looker, just a hooker, pressure was mounting like a pressure cooker. ` Avital is from Jerusalem, Israel and on my list for further investigation.

I didn’t turn up much about Lewis Ford and Dave Jones apart from it seeming like they were local fellas from Southampton. Their song “2AM” was dreamy and beguiling Nice song guys.

Etao Shin are a trio from Bristol via Southampton that label themselves as weird rock / Queerwave and comprise of Joseph Kelly, Steve Haynes and Ben Kill. Their song “KYARVALY” was certainly quirky and reminded me of the superb Belle and Sebastian at times.

Calico Cat is the brainchild of Sotones veteran and one sixth of Haunted Stereo Andy Harris.

Hannah Miller (vocals, cello), Oliver Austin (drums, vocals), bassist Jim Mortimore and Raevennan Husbandes (vocals, guitar) are the quartet that make up art rock band Moulettes from Brighton. Their offering is “Bird Of Paradise Part II (Live Version)” an eerie, psychedelic slightly off kilter piece that has aspects of folk rock throughout but works really well. I felt that the tune had elements of klezmer at times, which gave it a unique texture.

“All Roads” by another Southampton band follows from the Dream pop trio of The Diamond Age who are Bill Acharjee, Steve Barrett and Matt Canning. This was another track that I took to immediately. A real feel good tune in the vein of my favourite band Sparks but nearer to the much-missed Eighties synth pop outfit The Associates.

This track was very stop start and had some wonderful sax on it. A very unconventional and unusual tune that reminded me of the marvellous Cravats.

Southampton`s Zoom Around Rainbow is a solo dark and ambient electronic project. Samples, loops and sounds are made on computer and hardware then composed live with a sampler, step sequencer and analogue synth. This track “Papers” is an example of such and quite interesting. Another track by Anja McCloskey, this time featuring London Accordion Orchestra called “Spiralling” and it pretty much does what it says on the tin. A flowing track that allows Anja`s vocals to soar above a flowing accordion waltz and some orchestral snatches that really compliment this piece.

“Down To The River” is a track from another Southampton outfit called Moneytree featuring Campbell Austin on vocals/guitar, Jimmy Hatherley on guitar, Lewis Renshaw on bass and Oliver Austin on drums/vocals. The troupe are an indie band and I really loved this track, maybe it`s my ears but it reminded me of a slowed down, laid back version of `Born Slippy` by Underworld. Campbells vocals were mesmerising.

A song that won`t endear the band to vegetarians, called “Eat More Meat” is up next from raw garage surf groove rockers Londoners White Ape who have amongst their ranks Tommy Mack on vocals, Jim Turner on guitar, Mike Davies on bass and Olly Golding on drums. The song begins with a fairground organ to lull you into a false sense of security before Tommy starts snarling / chanting the line `Eat More Meat` and goes on to not exactly extoll the reasons as to why you should imbibe more animal flesh. A well-constructed and unerringly catchy ditty. It gets into your subconscious and will have you intoning the tag line for the rest of the day.

Southampton`s Avant punks The Beaux Hardts include brothers Bob Wade Brown on guitar, vocals and Dave Wade Brown on drums. Their claim to fame being the 6th Best band in Cardiff 2005, the track they deliver is “Know What To Do,” A captivating outing with plenty of indie / punk swagger. Another track that I really enjoyed, it did make me reminisce about bands I saw in the seventies such as The Buzzcocks and The Members.

“Secret Chapter” from Southampton`s Sleeping Tigers or Dave Miatt (vocals/guitar), Lewis Ford (bass) and Danny Sylvestri (Drums) who make up the band has the most uplifting intro that I’ve heard for a while and it doesn`t end there. A great slice of enchanting indie pop with some delightful harmonies, just under four minutes of heaven.

Granfalloon is the musical project of Manchester based artist Richard Lomax. His track “Wag” is a heart-breaking tale of a broken romance from which the narrator is moving on from.

A wonderfully cathartic offering. Southampton`s Pippin Atmark is the bass player and vocalist for noise rock post punk outfit SwordZZZ. His track “Farewell” is brash, raucous and noisy refrain that had me thinking back to when I heard the late great post hardcore Hüsker Dü. Excellent. Lonely Joe Parker closes out the compilation and features both Emma Richardson and Dave Miatt on the track “Number 9.” A nice relaxed melancholic song to finish on.

I really enjoyed this release from Sotones. It was varied and covered a diverse range of artists. There were some real mavericks on this record and it gave me a few new bands to check out.

I admire the concept and principles behind the label and wish them all the best for the next ten years.