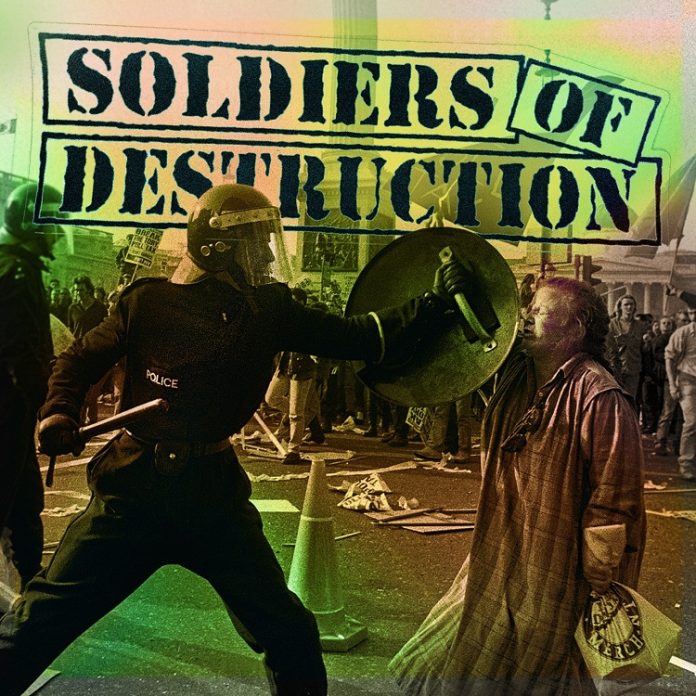 That’s the last line on “Cause And Affect”, but in many ways it is the point of the record, surely.

Often, I review punk rock on this site, and I mention that it sounds “American”. Here’s the counterbalance, which might be incongruous when you consider that Soldiers Of Destruction are based in Las Vegas, but it makes perfect sense.

See, these 14 songs might have been recorded in the 21st century, but their roots are in 1980s London. Literally. Punk misfit Morat – the only original member – trawled them round for three years with no record deal or no recorded material. He’s based in Sin City these days, (and I am going to guess that he doesn’t spend many Saturday nights watching Seinfeld as I did when I was there, but I digress) and he dusted the old attitude off to finally get the record out.

It’s fantastic, too. Nasty, nihilistic, drug fuelled, violent and a homage to heroes, but moreover, it sounds like “proper” punk rock.

Without Morat there might not be an MV, he was one of the names you’d trust in Kerrang reviews, he got me into Motorhead, through his words he got me interested in Clutch, and he did one other thing that can’t be underestimated: he got the Prodigy in Kerrang, and in so doing, he made it ok to not be bound by genres. You might be reading this now thinking “yeah, so?” but trust me, back then, that was massive.

In that context then, this feels like he’s back with his first love. “Anti Them”  is basically 65 seconds of bile that works on the principle that “what are you rebelling against? What have you got!” and it blisters at a million paces. “Cracked” spits the line “I’ll tell you why” like everyone relishes the idea, “Death Or Glory” is busy sniffing glue with abandon, and its not sharing the bag.

“End Of A Rope” is brilliant, chugging, and like so many of these it seems to find joy in its desperation, but make no mistake here, you can – if you so desire – sing along.

Bassist Dave Thompson, guitarist Cru, and drummer John Feeney do a fabulous job of making sense of the bludgeon, and by the time Nick Oliveri turns up for “Amphetamine”, you understand they can induce a moshipit too.

“Cheated” sneers like the Pistols, but could probably kick the shit out of them – and might actually be making a point, I suppose, “Drinking For Two” is mighty pub rock, before the tables and fists start flying.

Mention of Motorhead above was as deliberate as it was true, and “Kilmister” celebrates the man who could unite metal and punk before that was a thing,  “Also Gazes” the other to feature Nick Oliveri is veritable prog rock at almost five minutes, but the hooligan vocals disavow you of that quickly.

And – perhaps not surprisingly considering they waited 40 years to get the thing out – there’s no dips in quality. “Batshit Crazy” worms its way into the brain without a care, “Summer Fun” commits GBH on the Kaiser Chiefs, given that it isn’t predicting a riot but having one, “Undefeated” could be about any right wing politician, but it attacks popularism with a venom that is to be applauded.

“Sick Of The Sight Of You” is the sort of love song that you wish you’d written, “you say you got daddy issues?, here’s a box of tissues, boo hoo, it don’t take a genius to see why he abandoned you” is one of the lines of 2021, and the Eddie and the Hot Rods solo tops it off.

Which brings us back full circle to “Symphony Of War”. If anything here is a mission statement, then this is it, but in truth the whole album is so glorious and so certain that it doesn’t need your approval for anything it does mean that essentially the last 650 word are pointless. The spirit of 81 lives on, and this is one of the best, nastiest, records you’ll hear 40 years after, too. Except now, there’s no future, and we aren’t even dreaming anymore.