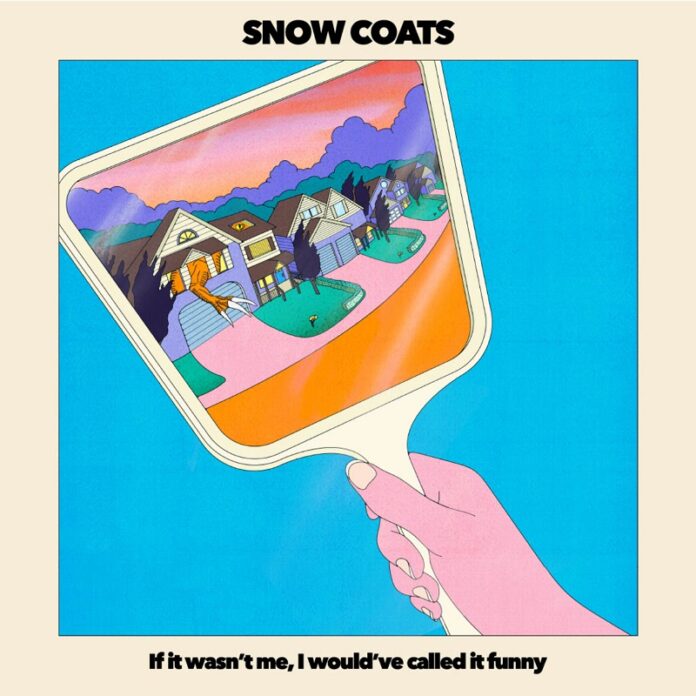 Snow Coats are a Dutch indie pop four-piece comprising Anouk van der Kemp (acoustic guitar / lead vocals), Frank Peters (bass guitar), Daan Ebbers (guitar / vocals) and Joost Ebbers  (drums) based in Arnhem. The quartet have a new album ‘If it wasn’t me, I would’ve called it funny` due out this month which follows up the band`s debut album `Take The Weight Off Your Shoulders` which saw the light of day in the summer of 2018. This release covers topics such as love, awkwardness, social anxiety, and the ways in which songwriter Anouk van der Kemp perceives herself in certain social situations.

The album opens with `For A Moment` which is a breezy pop offering with jangly guitar riffs and pounding drums which races along at times and seems to relate to somebody trying to acquire confidence in a dominant relationship. I read that `Anyway` was a song about “sometimes needing a less superficial and more sincere connection with someone, so you can be sad together,”  and if you were expecting something melancholic, it`s not. It`s a dreamy light summery tune with some delightful vocals that do have a kind of vulnerability about them.

`Dinosaur`  is a love letter to indecisiveness according to the singer and it`s a fairly fast paced quite reflective melodic number. There was a touch of the Pixies about `Ok Ok (Sue)` musically while the lyrics seemed to be infatuated or in awe of the subject of the song.

`Chevy` has some charming interplay between vocalists, Anouk and Daan maybe, which portrays a couple meeting again after some years after a strained romantic relationship and trying to understand how they ever got together. We have in `Right Fit` a track that is about growing apart from someone after realising that nothing will work and you`ve grown apart. The pain and frustration experienced can almost be felt I the vocal delivery.

There`s a kind of wistful dreaminess in relation to `Amber` which appears to be a reflective outpouring while `Since We Met`  looks to be about a romance that`s on the slide before it`s even gained legs. There`s a delightful inflection in Anouk`s vocals as this tranquil number progresses

`Too Good` is principally vocals and a strummed acoustic guitar conveying concern that the protagonists relationship seems to be drifting and is unlikely to change as communication only seems to be in one direction. The album closes out with the bubbly `Marie` a much brighter tune to end on.

‘If it wasn’t me, I would’ve called it funny` is an uplifting light indie pop offering that will bring a little sunlight into your life. Although at times the songs are lyrically downbeat or just possibly honest, the music is always fairly uplifting. Anouk van der Kemp has such a captivating vocal delivery where at times she`s sounds nearly breathless or nigh on whispering the lyrics over a talented engine room of Frank, Daan and Joost who provide a t platform for their conveyance.

This release will leave you with a warm feeling inside which is as much as you can ask for in these dark and difficult times.