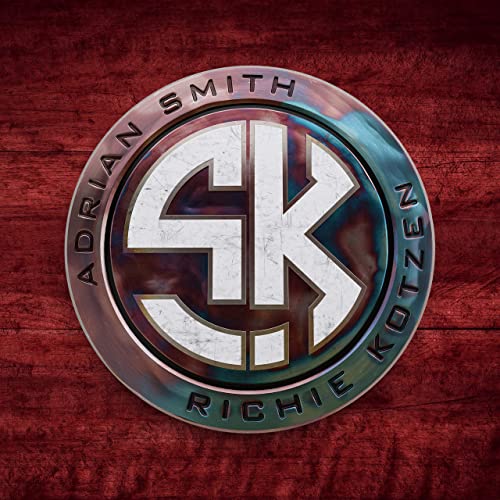 You know, when “Smith/Kotzen” was announced, it struck me as odd. At least it did for about five minutes.

Then I thought about it. See, both of these men are in their own ways, deserving of more credit than they get. I’ll explain.

To me, Adrian Smith always seems like the most effortlessly cool in Iron Maiden, the one who was ready to take chances, after all, never mind the other stuff he did after leaving the greatest metal band in the world (fact, no debate) just look at 2012’s Primal Rock Rebellion. A collaboration with Sitkth’s Mikee Goodman , which came about (if I recall correctly) because Goodman played Smith’s son’s birthday party). He is always ready to push the boundaries.

And that is Kotzen too, surely? We investigated when he joined Poison for “Native Tongue”, then we found that his “Fever Dream” album was one of the best we’d ever heard at that point, and if listing all his other endeavours, would take the rest of this review then, I’ll leave it here that if there’s been a better song than his “Oh My God” from forty Deuce written anywhere in the last 20 years, can you send it to me, please.

Which leads us to “…..Chances” and this could have gone either way. After all, you can have all the talent in the world, and if you don’t gel….

Forget it, this sounds incredible.

Recorded in February 2020 just before the pandemic over in LA, it is clear that as soon as the opening track “Taking My Chances” hits, that what we are dealing with is two incredible musicians doing what they do. And what they do in this case is make some wonderful hard rock.

More Kotzen than Maiden, as it were, there’s a modern crunch about “Running”, that serves as a soaring vehicle for Kotzen’s brilliant voice. And there’s a joy here, there really is. The way they trade licks is a thing of beauty.

“Some People” thunders, but it does so with a swaggering funkiness, but that they follow this up, merrily with “Glory Road” a 70’s infused blues rocker, with mighty organ,  that is somewhere between Joe Bonamassa and Deep Purple. Classic rock? Yeah, but only because it rocks and is a classic. There’s nothing dated here, in truth.

Kotzen handled the drums in those initial sessions but as time passed the pair decided some of them could do with a tub-thumping spruce up, so for “Solar Fire” – which really does seem to burn with an energy – they fetched some chap called Nicko McBrain in. Not sure who he is, but the boy has a future if he plays his cards right……

To be serious, there really is not a weak spot on this. Genuinely it is wonderful throughout. “You Don’t Know Me” is close to be being prog metal – there’s a touch of Dream Theater here – and “I Wanna Stay” is another blues romp, that said, it puts the power back in power ballad, too, while there’s an epic feel to “Till Tomorrow” like it exists on a massive soundscape all of its own.

In many ways, that’s the album too. You can pick out the influences, but what you can’t pick out is anything quite like it. Neither of the pair are doing this for any other reason than they needed too. That is to say, they have a need to create, a desire to push themselves – and that shines throughout this incredible album.