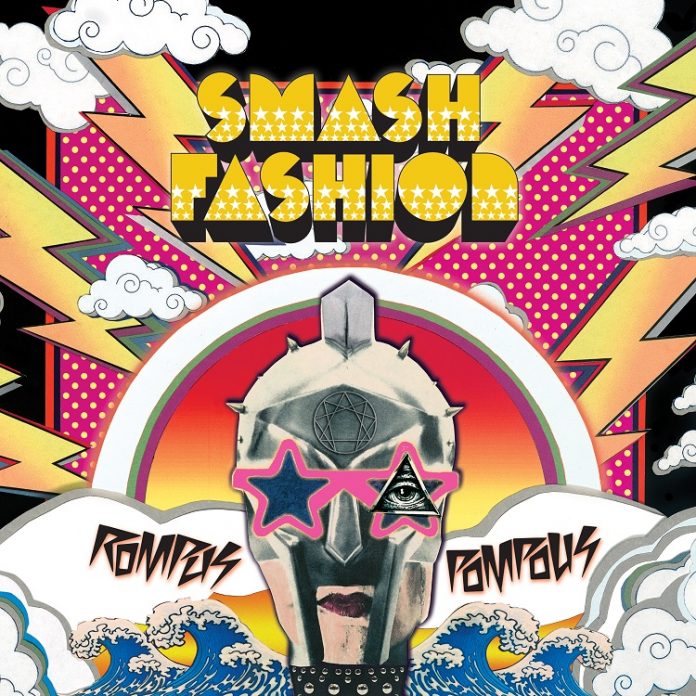 Nothing beats the visceral pleasure of a record that reveals itself to you before its even got through the first intro. AC/DC were especially good at this, Thin Lizzy too, and there can’t be anybody who’s ever seen Iron Maiden that hasn’t lost their shit at the opening riff of “The Trooper”.

The fourth album from LA’s Smash Fashion, without sounding much like any of those bands, is cut from that cloth.

That is to say, before the glorious lead guitar of Lloyd Stuart Casson has finished ushering in the opening cut “Can’t Take You Anywhere” you already know that you’re going to love the quartet.

You may already love them, and good luck to you if you do, but for the uninitiated like me, “Rompus Pompous” is their fourth album, and the singer Roger Deering was in Rattlebone (who’s debut album I loved back in the early 90s).

This omission in my knowledge looks like a staggering one, frankly, given the quality of songwriting on show throughout “….Pompous” (which in actuality is just about the least pompous record of 2018).

Like some glorious mix of Silver Sun – goodness me, those harmony backing vocals! – Last Great Dreamers and Mott The Hoople, it is just about the most glorious bottling of glam rock meets power pop meets summer vibes you can possibly imagine.

“Soft As A Rock (Helium Head)” rather neatly proves the opener wasn’t a fluke, and even manages to add the feel of the Hold Steady’s debut record just for kicks, and if you were looking for yet more reasons to text everyone you know to tell them about this brilliant band you’ve discovered (and most probably have them tell you that you were last to the party) then allow me to present this as exhibit A. This is a verse from the title track: “part of the glitterati, you light your cigars with burning cash/ you like to dress like a Nazi/ you’re always busy waxing your moustache.”

Ok, god, stop, sign us up to whatever petition makes these boys huge.

“Wolves Of Wonderland” finds the time to have a filthy harmonica lead and be as loose as The Stones on “Sticky Fingers” and “Teenage Demon” is – you hope – a tongue in cheek thing worthy of The Ramones.

Then, well, then there’s “The Proper Way To Eat A Muffin” which is both as unashamed a glam rock homage as you will find and in possession of the dirtiest double entendre this side of “she told me to come and I was already there……”

There’s a ska edge to “Runs In The Family”, mixed with the sweetest harmonies, plus some Allman Brother style twin guitar. And if you think it shouldn’t work, then it does, of course it does. They can even get chilled out, blissed out and zoned out on “Tender Was The Hook” with no problem at all, and any time my notes for a song say “Georgia Satellites covering The Beach Boys” is a damn good time – and that’s exactly what was on my phone as a bullet point for “Ugly Thugly.”

“Gentle Hand” has a bit of a Tom Petty thing going on – and also the thought that you probably deserve a bit of a….helping hand… after that muffin eating probably wasn’t far from the mind here.

The album ends with “Smiles And Daggers” a wonderful example of ambition, which manages to sound epic and brooding as it builds. It is basically six and a half minutes of brilliance, and as such is totally in keeping with the rest of the album. Though, it is the only one on the record that features David Bowie’s longtime musical conductor and pianist Mike Garson so is probably more special to the band.

The whole of “Rompus Pompous” however, is damn near perfect. And if you’ll excuse me, I’ve got a back catalogue to check out – after I’ve listened to this again first.