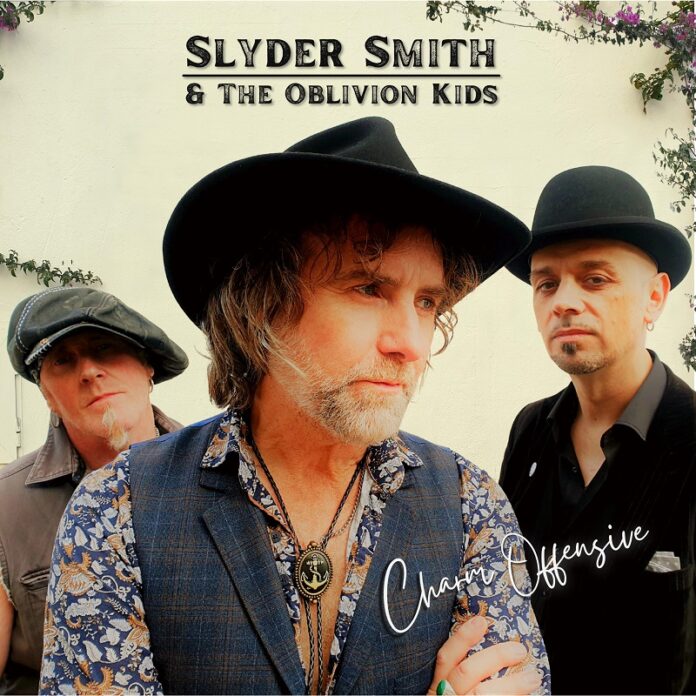 At the risk of sounding like Troy Mclure on The Simpsons, you may remember Slyder Smith from such bands as Last Great Dreamers. The band who should have been. A band that had the songs to be.

They were essentially coalesced around a couple of frontmen, if you will, Slyder and Marc Valentine. The latter has just put a solo record out and now Slyder has essentially done the same. With the addition of his “kids” if you will. Tim Emery on bass is well known to LGD fans, given that he did the same job there too (plus he’s also in Richard Davies And The Dissidents, one of the finest underground bands around) and likewise Rik Pratt on drums has done that job for the Dreamers as well as being in MV faves Continental Lovers.

So, its sort of in the DNA, I guess. So we’d best start with the couple of Dreamers takes that are here. “Crash Landing In Teenage Heaven” – the title track of their most recent record. We can probably agree that Slyder thought this should have been a Bowie-esque ballad rather than the trashy punk it was, given what they’ve done to it.

The other Dreamers tune is “The Oblivion Kids”. Ok so Slyder took the band name from it, and in truth it sounds like the original, but it’s a belter.

There are 14 songs here, so we might as well discuss the third cover. This one has nothing to do with LGD and if “Limahal’s ‘Never Ending Story” was a phrase I never thought I’d be writing on this site, we are where we are. And it’s not bad, either.

As for the originals, it might be bookended with some Spaghetti Western stuff (but then Dog’s D’Amour, Gypsy Pistoleroes and the likes always turned glam into some kind of Cowboy stuff) but mostly its just about a gift of melody.

“Calcio Queen” will appeal to fans of Diamond Dogs. Sulo has made a career of such things, but there’s some things here that you just didn’t think you’d here. “I’m Done” is funky in a way you never imagined this would be, and the guitar is brilliantly low-slung, and if “When The Rain Comes” is more akin to Dreamers stuff, then that’s cool, isn’t it, given that this is ingrained in all of them?

Basically Slyder has always been the master of the three minute pop rock song, but as he points out himself “Over the last year or so I’ve been working very hard developing my guitar playing, music & lyric writing pulling myself in all sorts of directions, and really stretching myself.” And the evidence is in work like “I Don’t Want To Run”, which has more in common with the Manics epic rumbling stuff and the Saxophone of “Maya” takes that the album in directions you hadn’t imagined either.

“Pleasure Victim” is one of the best, screeching punk rock and a solo that really slays, but really, just because it highlights the diversity of the record, then “Road Love” – essentially an anthem to the motor – is right up there.

There’s even a ballad of real tenderness. “Hope Without Warning” even has tender lyrics that come with a real pathos. I assume too, that if we praised this for having a Kinks-like quality as it builds, then no one will be too upset.

Ultimately, it’s a bit like Ginger Wildheart said once: he can do all kinds of stuff and there’s something inbuilt that means there’s a melody. Slyder Smith has the same gift, but on “Charm Offensive” he and the Oblivion Kids have taken it into so many different places that you can only marvel at it.