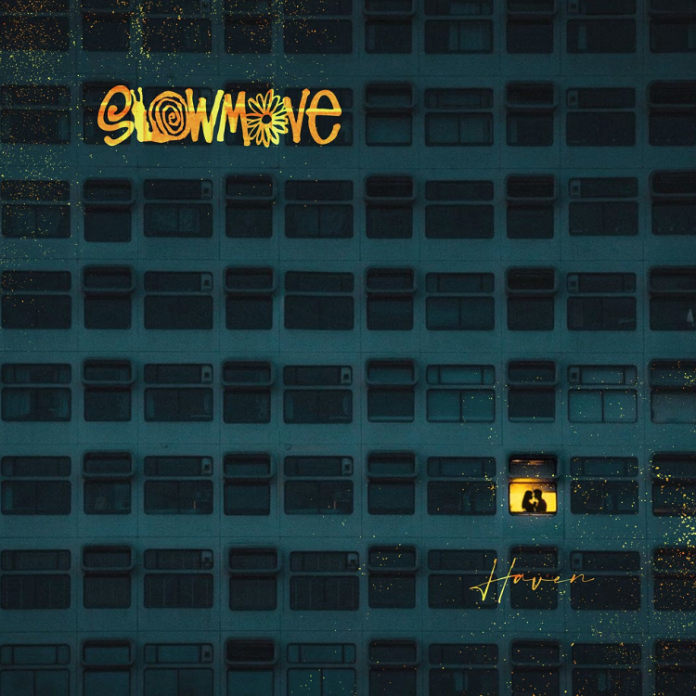 Slowmove are an emo/post hard core rock quintet. They include Gemma (vocals), David (bass & vocals), Luke (guitar), Joe (guitar) and Den (drums) and hail from the cities of Edinburgh and Glasgow. The group is comprised of well-seasoned musicians who cut their teeth in local hardcore shows as members of bands like Afterburn and Vent. They have a four track ep `Haven` released this week following a couple of single releases earlier this year.

This extended play opens with `Behind Closed Doors` a number about not knowing what’s going on in other people’s lives, the issues, and hardships they’re going through on a day to day basis which seem to be completely hidden away. But ultimately do they have the strength to change the situation. It begins with some thumping drums, throbbing bass, and blistering guitar chords for nearly a minute before vocals that sort of sway along at times join in. it then takes off at a scorching pace with guitar solos vying and interloping with the main vocals and harmonies before reaching a climax and abruptly ending. We have a love song of sorts with `Here And Now` which seems to relate to meeting someone who is sympathetic and suddenly they feel that this romantic liaison can cure their blues. But ultimately they realise that it`s not quite enough to overcome depression and anxiety. There`s a line in the song that I felt was very telling “The light you bring shines brighter, than the sun that breaks through the trees and I’m in awe that you would sit and listen while I speak” Although a difficult subject the number has a dreamy summery uplifting vibe.

`Lights Out` is an instrumental that has a quite mesmeric texture to it and builds volubly and musically as it proceeds along its journey. We close out with title track `Haven` which is an energetic and enthralling composition which is shared at not quite breakneck speed but heading there about an all-consuming passionate relationship. Although the narrator still has some nagging doubts as to if it`s purely one sided.

It`s obvious that Slowmove have spent some time together as a band and have really honed their sound. There was much to enjoy with the `Haven` EP and I look forward to what`s to follow.