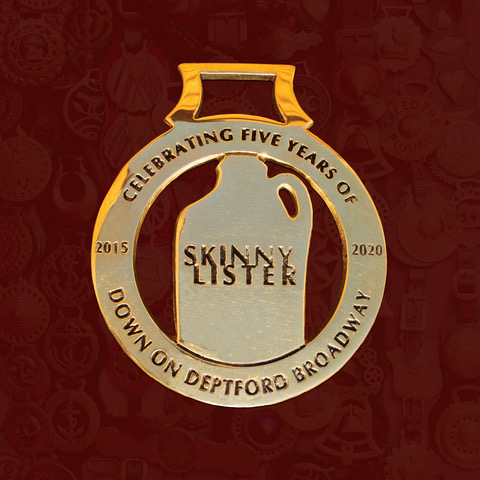 “Don’t just sit there, being terrified – Everything gonna be alright”

“This city got a rhythm that we move to”

Discovering an urban folk-punk-soul band in a faraway metropolis is always a wonderful thing. I returned from a trip stalking my favourite band around the midwest in spring 2000 with the words of Philly band Marah who I’d met in Kansas City bursting through my ears desperate to tell all my mates about them. 16 years later I found myself in Chicago at the outset of a not too dis-similar journey and at a loose end. My mate preferred to stick around the Magnificent Mile area with another buddy whilst I was itching to see a gig so flicking through the listings found to my surprise two British artists playing to the north of where I was staying and on the same night – Gaz Coombes (of Supergrass fame) was on at Lincoln Hall and an outfit called Skinny Lister were topping a bill at the more intimate Schubas Tavern. Intrigued, off I went to get in a few of North Chicago’s taverns and ale houses which would wind up me passing said venue approximately 9pm later that evening on the off chance of a ticket. On approaching the venue it looked full, the sign said sold out but the guy on the door accommodated me and I was in for the last 20 mins of the support act – Beans on Toast. A tiny venue but absolutely rammed with a much younger crowd than I’d imagined there’d be and captivated by this Braintree Essex boy singing about the ‘Great American Novel’ and shouting ‘Fuck You Nashville’. Grab another craft beer from the front bar of this joint and find a spot to see what the headline act were all about.

My jaw hit the floor when they came out onto the stage and played their asses off in a joyous, exhilarating concert experience, it was visceral, exciting and invigorating. Heart, energy and uplifting soul. Was I really jumping around to songs I’d never heard before, ducking out of the way of assorted band members crowdsurfing including the double bass player with his double bass and then sipping liberally out of a jug passed around containing christ knows what?

Can you imagine anything as intimate or communal these days?

Music always had been a far more communal experience than it has become, people would get together around campfires, at village dances or else in town pubs and karaoke bars just to sing together. Skinny Lister come from that tradition and have, since forming in 2009 been fighting tooth and nail to bring that back. Passing a jug of rum, singing sea shanties and playing music that demands their audiences to throw off their shackles and join in. These were old time troubadours dressed in brogue boots and sun dresses. “Follow your fearless heart, walk on down your own path” they implore so raise a glass and raise your voice to this folk-roots-shanty-punk outfit.

Currently a 6-piece. troupe, Lorna Thomas (lead singer on several songs) plays ukelele, sings her heart out and regularly dives into the crowd and dances with the audience. Her brother Max Thomas “liked going to festivals and basically joined the band to get into them for free”, plays the mandolin and screams and shouts with high energy, these siblings from a musical family active in the Leicestershire and East Midlands folk scene before Max upped sticks to London.  Dan Heptinstall is also lead singer with a gruff northern English accent but deeply in love with all things London, and plays guitar and stomp box. Sam “Mule” Brace is another guitarist and plays concertina, who also leads, with much gusto, the sea shanties in their sets. Thom Mills on drums and these days Scott Milsom is on bass but when I saw them (and around the time of the original album release) this role was occupied by Michael Camino out of Hawaii. The album was originally recorded in Rockfield, Wales in 2014 but not released until sometime later in 2015.

Down on Deptford Broadway (a line from the track Six Whiskies) has a folky, punk aesthetic vibe, contains several catchy pub-rock songs and harmonies, opening with the sea shanty “Raise a Wreck” which features fervent call-and-response vocals and closes with a gentle ballad “The Dreich”. The album showcases the bands dynamite performance styles and the album cover features an eclectic mix of horse brasses, buckles and antiques.

The bonus demo tracks that accompany this re-release are in the main not too dissimilar to the 2014 recording which when it surfaced in 2015 sounded glossier and more polished than their previous work on record, the lyrics standing out moreon the demos showing their punkish roots

At the completion of the 2016 gig I bounced back out and onto the ‘L Train’ back to the Magnificent Mile hotel where my buddy was kindly putting me up. But not before one more visit to Clark Street Ale House. The night still felt young even though it was almost half past one in the morning and I had an early flight next morning to Denver to catch up with my mate Bruce.

“Calling for last orders, there’s a lock in for those in the know”.