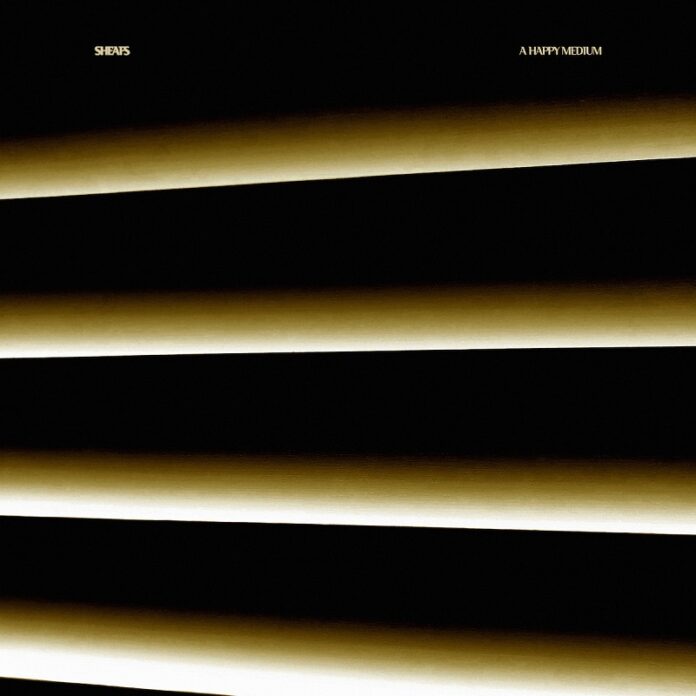 SHEAFS are a Sheffield based indie rock come post punk quintet who release their debut album `A Happy Medium` this month. The band have built up a loyal fanbase through constant touring and have just come off a tour as special guests to punk icons The Buzzcocks.

The album opens with `En Route Distress` which seems quite self-analytical and I think it leaves you to decide for yourself whether the narrator cares or not that they seem to lack ambition / direction in life. The drums, bass and underlying guitar riffs set a platform for vocals that are shared almost remotely atop. We have a faster paced number  with `Monotonal Living` which appears to be a reflection on the tedium of how life can become without variation.

`Cycles` is wonderfully hypnotic with a shimmering guitar riff and constant drum beat that leads us along this mesmeric journey. The vocal almost becomes another instrument but it does become fairly irritated towards the end. I thought there was a quite dystopian feel  to `Vacancy` which I read “describes a nationalist’s outlook and the narrow-mindedness that it often partners with. It’s a poem that reflects a stubbornness that, once established, can’t seem to be withdrawn.”

`Losing All Inhibitions` has a fairly long intro almost and is nigh on spoken word when the lyrics are shared. It`s really introspective and self-questioning and the recurring statement of `Losing All Inhibitions` becomes mantra like shared over some wistful guitar chords, pounding drums and a thumping bass line. There was the shadowy presence of early Joy Division on `Spectator` which to me, is no bad thing. The band have shared that it was “written with the idea of ‘people watching’ and playing the role of a spectator. The idea of looking at someone and not knowing who or how they truly are.”

`For Now` seemed a little melancholic with a kind of dreamlike quality about it. There was an almost desire or yearning shared throughout it`s lifespan. There was a feeling of being lost in one`s own thoughts in `A Reverie` which really is the meaning of the word. A gentle quite spellbinding number.

The group has said that `Millennial` is a “direct reference to our generation and the burden of trying to find success in every avenue of life. The track tries to echo the frustration that accompanies this so-called ‘pressure to succeed’.” Although the subject matter is a little heavy, the track is quite an uplifting indie rock composition. The album closes out with `The Room` which combines all the band member`s talents as we enjoy a meld of shimmering guitar chords, leading bass, pounding drums and a vocal delivery that is pitched over and around the edgy musical cacophony.

There was so much to wallow in with `A Happy Medium` and for a debut album it`s a real thumper. It`s pretty obvious as to why SHEAFS who comprise Lawrence Feenstra (vocals), Chris Goodacre (lead guitar, backing vocals), Charles Mellor (guitar),  Callum Wright (bass guitar) and Charlie Eastap (drums) have built up a loyal following with their rich and questioning soundscape

The band head out around the UK on their own headline tour to promote the release of the album this week so I’d urge you to purchase your tickets early. This outfit will not disappoint.