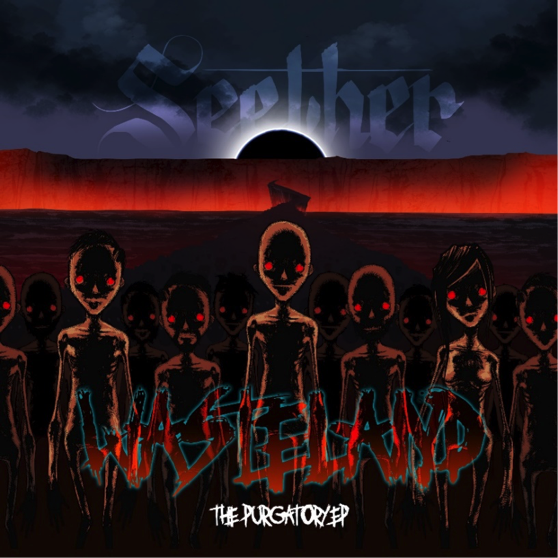 I spend a lot of my life musing on the passing of time and the onset of technology. Now, I know that once the genie is out of the bottle it isn’t going back in, but honestly, the things that we miss!

Today’s kids, with their Spotify, their Snapchat and all the other things I don’t understand will never know the joy of the CD single. Buying more than one of the same single for the b-sides.

Man, that was fun. Now, of course, its packaged as something else.

Now its “Wasteland – The Purgatory EP” and a press release that isn’t shy of hyperbole: “Let’s be honest, most post-album EP releases are semi-lame attempts stuffed with B-sides, retreads and otherwise discarded tracks that weren’t good enough to make the cut the first time. But Wasteland – The Purgatory EP, SEETHER’s ravaging new 5-track monster happily turns that notion inside out, upside down and then rips its head off.”

There’s a lot to unpick here not least of which is this: some of the greatest songs ever made were album tracks. Then there’s the not inconsiderable point that by putting not one but two versions of “Wasteland” (a fantastic song on last year’s fantastic “Si Vis Pacem Para Bellum” album) and three b-sides together on this is pretty exactly what singles have always done.

The alternate, predominantly acoustic take on “Wasteland” doesn’t half sound like Pearl Jam, but forget that. Instead, lets savour the unreleased songs. Like the old days.

And Seether – who are never less than brilliant, ever – lend themselves to that, as they are basically proudly still making music that would have been incredible in 1994 and still is today.

“What Would You Do?” sees Shaun Morgan at his melancholy best: “always gonna be the same old tired shit,” he yells during the chorus, but its how the chorus gets there that counts. Loud, quiet, then load again. This is a band with gravitas, one that exists in its colours.

“Will It Ever End” works itself into a frenzy after lurking in the shadows for a spell, “float away and let me drown” opines Morgan, a man who is never shy of exorcising his demons in his lyrics. If the name Kerbdog means anything to you, get on this immediately.

Best of the lot, is the quite incredible “Feast Or Famine”. Thundering in on a riff that would make Life of Agony jealous, it is then propelled by a bass groove as a vehicle to get to a chorus that is precisely why this band does arenas across the world.

What’s that saying? The more things change, the more they stay the same? On whichever level you look at it, that’s right here. Close your eyes and its like you’ve just bought this on CD in your lunch break and play it loud when you get home. Imagine that, oh and there’d be no Facebook either.