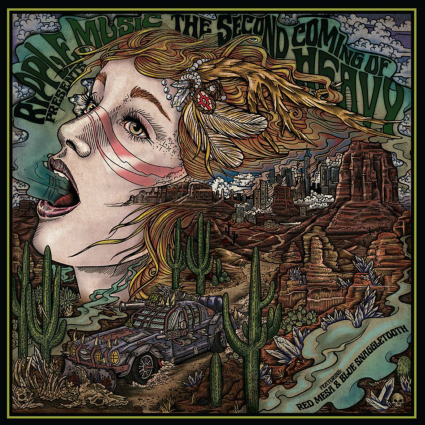 When we were young, going back to the late 1980s, there were a few music magazines that used to give away Flexi Discs. It is possible that anyone under the age of 35 is presently scratching their head and going “shut up, Grandad” but bear with us here.

These little pieces of – literally – plastic, were ace, because when you played them, you’d often discover some music you just hadn’t heard before. This reviewer can actually vividly recall hearing Warrior Soul, Saigon Kick, Love/Hate (this one might have been a proper vinyl on the front of Kerrang) and Paradise Lost (this one was a tape from memory) in that way, it was more fun that Spotify or Facebook, lets be honest.

The good people at Ripple Music clearly think so too, given that they are doing the modern equivalent. This is the fourth instalment of their Second Coming Of Heavy series, focussing on giving underground bands some exposure and this seven track little sample is absolutely marvellous.

Four of the songs come from Red Mesa, who are from the Deserts of New Mexico, and lead off with a track called “Cactus Highway” which is a foot the floor 100mph race through everything that’s ever been cool. Ever.

Blue Snaggletooth offer three of their own. At first glance the Michigan natives are psych rockers, but then,  Michigan has so often been at the vanguard of things that as you would expect, there is some true innovation here. “Blue Sand Witch” knows its past, but is really more concerned with the looking at the future, “Crystal’s Gaze” is a look into a real mind-bending world, bewildering riffs and pummelling drums abound – and if anyone can fathom the meaning of the lyrics here, then please let us know.

BS – and there is none of that here – conclude their selection with perhaps their best tune, “Mystic Waters” is kind of what Cream might attempt if they were making music in the 21st Century, classic influences and modern intentions abound throughout this and the soaring solo to finish is superb.

That is a neat summation not just of this song, but this particular concept.  There’s talent in the underground and a delve into these songs is to find much to enjoy.