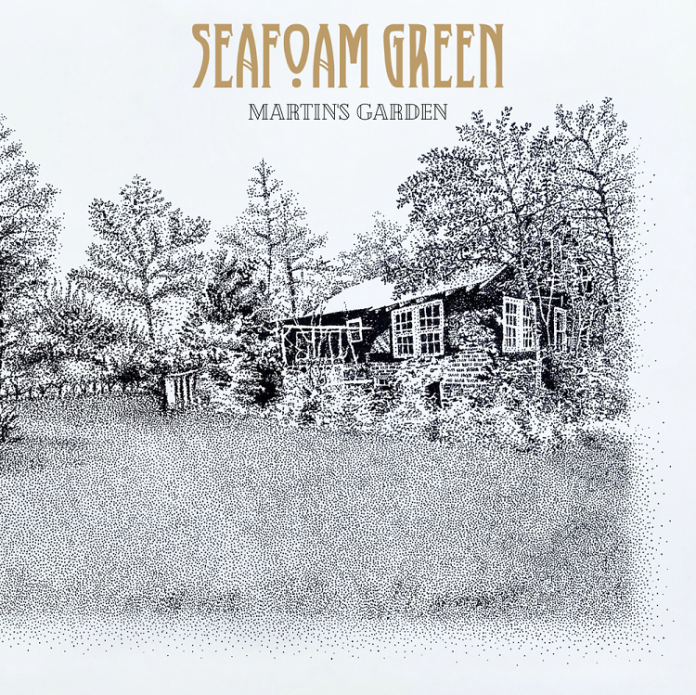 Four years ago, Seafoam Green were in the mansion. Now they are in the garden, as it were and that suits them just fine.

Back in 2017, you see Dave O’Grady – who had by his own admission spent 15 years honing his skills – met Rich Robinson and the two became friends. With that the curious, but brilliant, “Topanga Mansion” was born.

Robinson is not here this time, but the Dubliner still found himself in Atlanta. Why? Well, Tyler Greenwell of Tedeschi Trucks Band liked them and he let it be known that he wanted to be involved.

Now, that’s cool – and you can forgive them for being star-struck – but let’s get real here. If Lionel Messi left Barcelona tomorrow and signed for my lot, the chances are we’d still be crap. The point is, you can get whatever players you damn well please, and you’ve still got to have a chemistry and a skill.

Which brings us to “Martin’s Garden”, and I’ll going to give you about 15 seconds of “For Something To Say” before you can give into the inevitable: it might be in the top five songs made by anyone this year.

Now, there’s a lot of guests here (we’ll get to that) but Muireann McDermott Long is the trump card. She’s brilliant. “Lets not go to Oklahoma,” she sings (she basically does co vocals with O’Grady) “cos all that God scares the Jesus out of me…..” and you simply cannot fail to love this.

They are billed as an Americana band, and that’s cool, but they aren’t. They aren’t arsed with your preconceptions. “House On The Hill” veers from thunderous arena drums to a soul, and a slide guitar that Billy Gibbons would love.

And speaking of slide guitar….well there’s a bloke called Derek Trucks who was desperate to play on this, so he did on the mighty “Mine All Mine”.

When I reviewed the last one, I made some remark about SF being “naturally different” and thats even more the case here. They aren’t wacky, they just don’t think like conventional bands. “Maggie” kind of floats as McDermott Long flexes those vocals once more, and there’s a sort of blues about “Whiskey”, on which O’Grady gives it his best troubadour.

The thing is, though, that you can never second guess this. “Swimming In The Paint” is light, airy pop music, there’s a 70s feel, maybe a Supertramp or a 10CC, while “Winters Getting Warmer” could almost be an outtake from those sessions they did with Rich Robinson. You can certainly imagine The Magpie Salute giving this a crack.

Nothing shows them better, perhaps than the fact “Working Man” – the most “Americana” if you will, even if its set in Dublin and has a proper Celtic flavour – is followed by the “Auld Triangle”. A windswept folk thing, bringing to mind the same misty moors, perhaps, as Seth Lakeman at his darkest, and “My Oldest Friend” is so warm and welcoming – at the same time as being so fragile it might break at any moment.

If “Topanga Mansion” sounded like an artist living out his dreams and making the album he was destined to, then “Martin’s Garden” is the work of a band who have a total understanding and mastery of their craft – as well as the skill to make their vision real.

The garden is in full bloom and is a wonderous sensory experience.