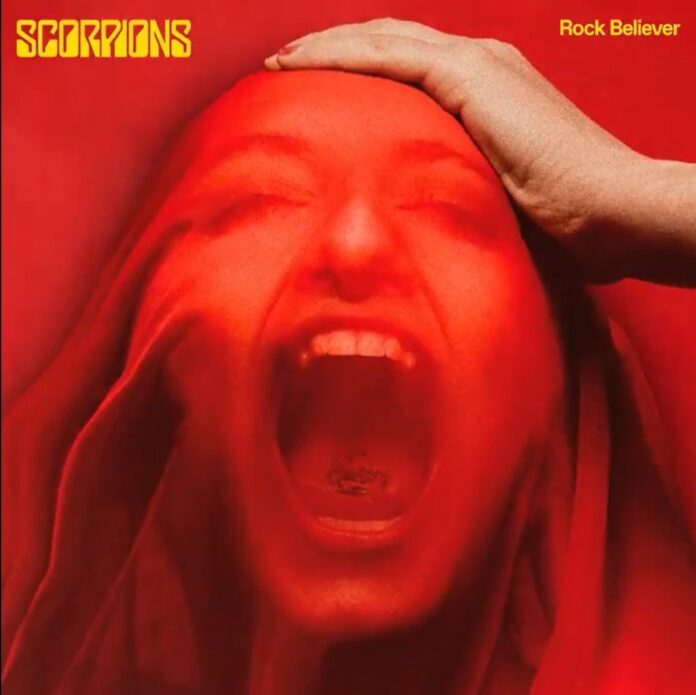 The other day I was playing “Rock Believer” when I went to pick MV’s Damian up to go to a gig somewhere. The car door opened, and he said: “The Scorpions!”

Scorpions, it seems to me, are about the only band who could exist for nearly 60 years, sell 100 million records worldwide and still be slightly under the radar. As Damian’s exclamation will attest, they are every bit as distinctive as AC/DC or Iron Maiden (add a thousand other bands here, as you choose) but they are without a top 10 album in the UK.

“Rock Believer” – their first album for seven years – is another one that will have the faithful flocking, putting on the denim and leather and raising their fists in the air.  It’ll leave others cold, and that’s absolutely fine: Scorpions couldn’t care less.

“Gas In The Tank” with its sleazy opening tells you all need to know. Rock’s most irascible septuagenarians are here to reclaim what’s theirs. As Klaus Meine puts it: “the king of riffs is back in town”.

He’s been the singer since 1969. Rudolf Schenker has four years on him, and the chemistry the pair have always had is right there. Their love of this is underlined on the fabulous “Roots In My Boots”, which concludes at its end that “its simply in my blood” and watching them at Bloodstock (the only time I’ve ever seen them) a few years back, you couldn’t argue. They are special. They know it.

Mickey Dee thunders on the proudly 80s metal of “Knock Em Dead”, while the title track is so damn good at walking the line between hard rock and power metal, that it verges on genius. In other hands, it’d be ludicrous. Here? It’s glorious.

That, essentially applies to the rest of it too. The more modern sounding ones, “Shining Of Your Soul” for example, or “Seventh Son” which is bombast writ large (indeed, to be truthful, on my notes for the track I’d simply written: ‘makes Def Leppard look like the weaklings they are’)  or the ostensibly throwaway “Hot And Cold” are all bound together by the fact that you absolutely can’t resist them, however you try.

“When I Lay My Bones To Rest” rockets along like Saxon do, “Peacemaker” has a twin guitar bit that makes grown men like me nostalgic for times they weren’t born in – not for nothing was it the first single they put out from “…..Believer”.

“Call Of The Wild” has a darker, thicker sound, before they almost single-handedly resurrect the power ballad with “When You Know (Where You Come From)”. They must like that one, as there’s a second version on the deluxe edition. Five extra songs that prove the fun was always in the b-sides.

If singles existed any more in physical form then “Shoot From The Heart” would be an instant cult classic. “When Tomorrow Comes” on the other hand stretches the boundaries a bit  – Meine partly speaking a lament for the world – “Unleash The Beast” rather neatly unleashes the power of metal on the pandemic at a guess, and the glam rock stomp of “Crossing Borders” is another that brings a smile to the face.

A couple of years back there was a barmy podcast series that tried to claim The Scorpions “Wind Of Change” was a CIA plant. And it is something of a horrible irony that the Iron Curtain is rising again at the very moment that “Rock Believer” is released. There’s hope in these songs though, there’s a feeling in them too.

For goodness sake, as long as bands like The Scorpions are still making music as good as this 53 years after their debut, I refuse to believe that the world is an irredeemably bad place. If you ever thought that we could be this close, like brothers, then this one is for you.

Previous article
LAS RESORT
Next article
BAND OF THE DAY: THE BOPPERS