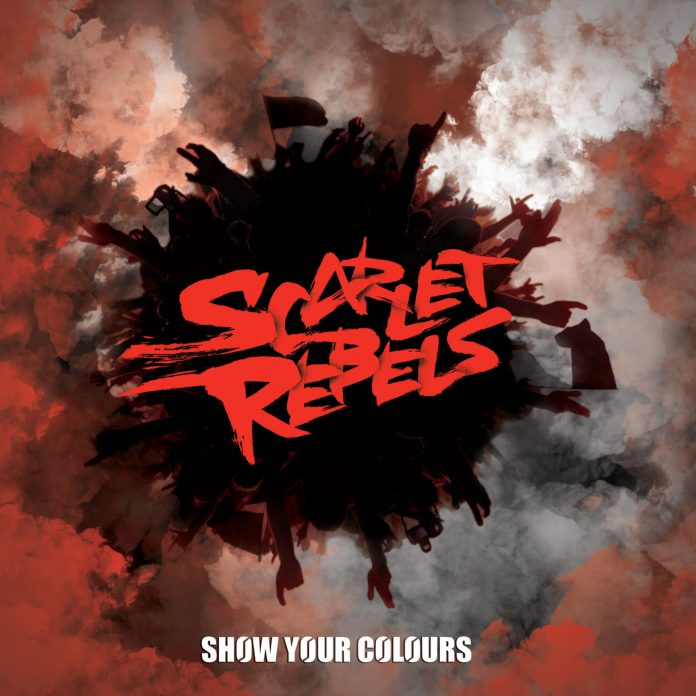 Let’s play a game of everything you think you know, you don’t.

You’ll listen to the first 15 seconds, thereabouts of “No One Else To Blame” the superb first track on “Show Your Colours” and you’ll be thinking: “promising hard rockers, make debut statement. Planet rock will lap this up.” I know this because they were my notes for the track.

The second, “You Take My Breath Away” though, was a little different. It has a keyboard flourish to add to its sleazy guitar. And the chorus, brothers and sisters, soars. The bridge? That’s ready to bother arenas in the future.  If you like Inglorious, then let’s be honest here, you are going to love this.

But remember the premise of this game? Remember we are playing a game everything you think you know, you don’t.

So, here’s the scoop. Scarlet Rebels used to be called Void, they’ve released three albums. They decided they needed re-energising, apparently, so had a change of name and a change of direction. And there’s another thing. I have been looking for somewhere to put this in, so here’s as good as any to be fair.

Their keyboard player – you know the one who played that ace bit on “…..Away”, is named Josh Townshend,  and he comes from famous stock,. He’s got an uncle who might be in The Who, and his dad was on stage with both The Who and Eddie Vedder when I saw them at a small place called Wembley a few weeks ago.

So maybe this isn’t some band who is taking its first forays after all? It shows, too. “Head’s In The Ground” does the talkbox thing that Jovi did on “Livin’ On A Prayer” but turns its sights on The Donald rather than Tommy and Gina.

“Part Of Me” has some mighty slide guitar – indeed Chris Jones plays some mighty stuff everywhere actually – while the fact that this is a band that might want a lot more from life is shown on “Heal” which is absolutely expansive and slow building as only those with a mastery of the craft might do. “Let Your Love Go” on the other hand, has something a bit more incessant going on, and its solo is from another place altogether.

Scarlet Rebels don’t do anything ground-breaking, necessarily, but whatever, they do it well. “Save Me” isn’t much that all kinds of rock n roll bands haven’t done, but few with this class, and even though you know, probably, what “Blinded By The Pain” is going to sound like just from the title, it is a power ballad with a touch of freshness about it.

“Nothing To Say” is something a bit closer to Thunder. And that, really is where I’d put them. Social conscience a bit like Danny and the boys, tender love songs when they need them, and unashamed hard rock at all times, and a bit of a bluesy thing, as on “Shattered Dreams.”

“Can I Open My Eyes” in that respect, is just a little bit of a departure (but then, remember, everything you think you know, and all that?) alt rock, I guess you’d call it if you were looking for a hook to hang it on, modern day MSP, something like? Whatever, it is catchy and a genuine crossover slice of music.

The record proper ends with “Returning Light” a beautiful ballad, which gets bonus points for a line: “I could sit and draw you, from the last time that I saw you” that you’d have to have a heart of stone to criticise, but this was a band with ideas, clearly.

To that end, there are a couple of bonus cuts, “Losing End” has a bit of a Sterophonics thing happening, while “Radio Song” seems to be entirely predicated on the idea that an AC/DC riff going through a speaker stack is always fun. Which of course it is, even if the lyrics deal with the disappointment of seeing a band live that you think were going to be brilliant, but…..

Having not seen Scarlet Rebels, I can’t comment. What I can say is “Show Your Colours” raises its flag high and waves it furiously, but rather more, it is the work of a band that has raised the bar.