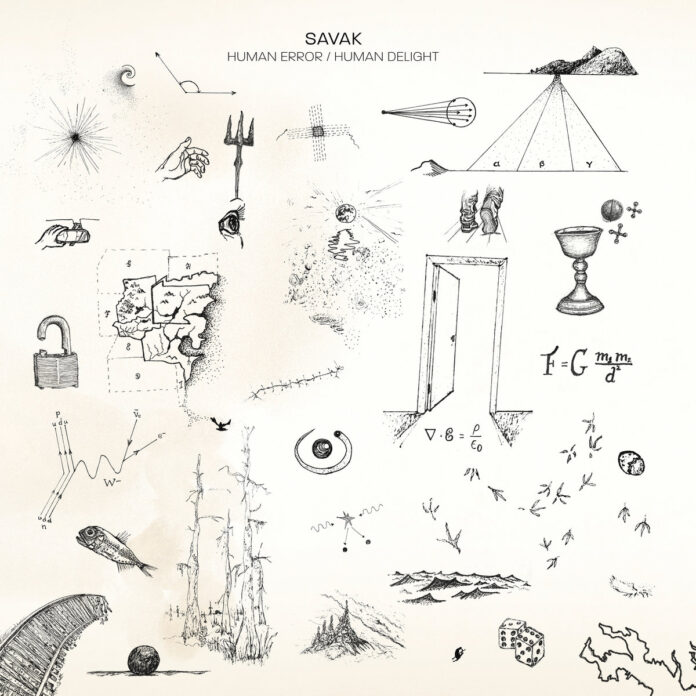 Savak who feature members of Obits / Edsel and Holy F*ck release their firth album ‘Human Error / Human Delight’ this month with their roots set in the Washington DC post-hardcore scene and post punk sounds and styles.

The album kicks off with `No Blues No Jazz` which is shared in a kind of distracted not belligerent way but heading there with its discourse of not being affiliated to anyone or anything. The steady drumbeat and grinding guitar chords lead us along with some delicious saxophone being sprinkled atop. I have to say I loved `Empathy`. It had that early REM vibe before they wanted to save the planet. A cracking earworm of a number to just get up and dance like an arse. It seems to be about somebody who really can`t find any affinity with others and for some reason it really struck home with me.

My Book On Siblings` was a slight curve ball in that it had a quite electronic texture and brought back memories of seeing a band called Our Daughter`s Wedding back in the early eighties. It builds as it evolves and closes out in a delightful cacophony of noise. There`s more of a rock out with `Cold Ocean` with its driving bassline and nigh on spoken word diatribe, delightfully hypnotic.

Just when you think that `Set Apart` is an instrumental number we have some brief musings in the form of “set apart set aside some return some resign all in time” shared over a background of distorted guitar riffs, some almost tribal drumming and free flowing sax, wonderfully compelling. There`s a reverberating bassline at the heart of `Oddsmaker` a captivating laid back submission that will really suck you into its heart.

`Thrashing The Ghost` has a quite dreamy feel about it with some blistering guitar riffs offered up throughout. A classic slice of indie rock that put me in mind of some of the stuff that Hüsker Dü used to gift us. There are some intricate guitar chords served up during `Recanted (Free The Singer)`  another spellbinding track that drew me in with it`s bizarre lyrical content.

`Baltimore Moon` is a mid-tempo foot tapper with lyrics that i`m sure could be interpreted in a number of ways. There was a much more mesmeric almost uneasy edge to `Adolescence Obsolete` with its repetitive relentless guitar chord leading us along. As adolescence is a transitional stage of physical and psychological development that occurs during the period from puberty to adulthood, maybe it’s no surprise this is an off kilter composition.

`Dealers` has a sort of Byrds meets Neil Young`s Crazy Horse ambience about it. The lyrics seem to be a metaphor on a relationship of dependency that seems almost akin to drug addiction and the desire if not the will to break the cycle. This release closes out with the oddly titled `Dumbinance` another laid back number that seems to ebb and flow as it progresses. I wasn`t too sure of what to make to the lyrics which were a bit surreal but have to say the musical accompaniment was enough for me.

I`d never heard of Savak to be honest and when I did an internet search the name produced the following info – SAVAK was the secret police, domestic security, and intelligence service in Iran during the reign of the Pahlavi dynasty. It was established by Mohammad Reza Shah with the help of the U.S. Central Intelligence Agency and Mossad. Whether the name was chosen specifically or not, it does resonate like their music. There were plenty of influences but they have a sort of interesting post punk – indie mood that really struck a chord with me.

The band who comprise Sohrab Habibion, Michael Jaworski and Matt Schulz invited a number of musicians to guest on the album mainly on bass with Matt Hunter, Douglas McCombs, Matt McQuaid, Anthony Roman, Geoff Sanoff and Nick Sewell but also leant on Josh Sinton and Greg Vegas to lay down saxophone on a variety of numbers.

This was a cracker of an album and I now have not only their back catalogue but also their individual bands to check out. I suggest you do the same if you haven`t already.