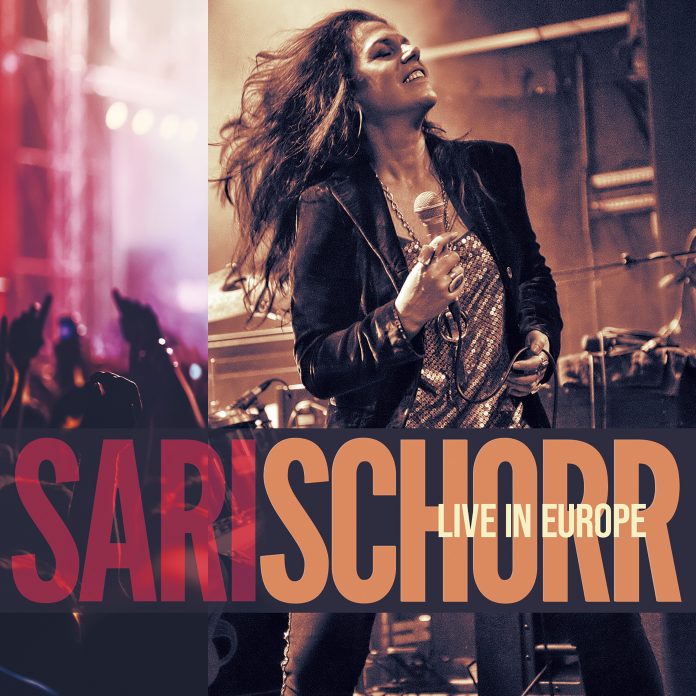 First things first, Sari Schorr is incredible. Let’s get it straight. I remember being sent her debut record, “Force Of Nature” back in 2016, and thinking it was one of the finest things I’d heard in ages. “The golden age of blues gets slightly more golden,” I chirruped in the review.

Then in 2018 she released the follow up, a very different record, more varied and with a different band, and “Never Say Never” was just as good.

The New Yorker is a phenomenal singer too. I’ve seen her live many times over the last few years – including one that was the first show on the tour on which this record was recorded – and seeing as this is a live record, one of them sticks out.

I’d gone to watch her at a tiny venue in Worcestershire one Saturday night. I have to sit at gigs, and my chair was duly at the front that evening, as I’d never have seen anything were it not, at some point in the set, when she was playing “Demolition Man”, she got to the bit where it goes “you’re just the man I need,” fixes me with a stare, and points.

I blush. Easily. But not often at concerts. I did that night. If I’d had the opportunity to get my phone out of my pocket and scroll the football news, I would’ve. All I did, though, was just get redder and redder.

That track is here – second in as it goes – and I had to smile hearing that line. I am many things. The man she needs, no. Not that.

But she does have a voice that conveys sultry (to wit, see above and thank Christ she didn’t do her cover of “I Just Wanna Make Love To You” that night, I swear I’d have grabbed my sticks and gone) just as well as it roars, and just as well, actually, as it does hard rock. “Revolution” was playlisted on Planet Rock for a reason. It is a cracker. King King could have had a field day with it to be fair.

Mention of Nimmo’s glorious troupe was deliberate. Because their ex organ wizard Bob Fridzema is all over this (Stevie Watts plays Keyboards on some of them too) and the band that she has this time is performing right at the very top of its game. Listen to Ash Wilson’s guitar on “Ain’t Got No Money” as proof, but then how this is balanced out with the light and airy US radio sound of “Turn The Radio On”, the contrast is stark.

A kind of bluesy rock feel wafts over the brilliant “Damn Reason” and I know I said this in the review at the time, so am repeating myself, but never have the words “Thank You” been said with more feeling than they are here on the track right in the middle of this. “Dump me?” it says almost. “Yeah go on then, dare ya!”

And yet I have spoken to Schorr a few times (never did tell her she made me blush…..) and she is a woman at odds with the voice, a vegan, sort of how I would imagine a hippy chick from the US West Coast to be, a free spirit who helped out in Haiti at the height of the humanitarian crisis there, which is sort of why I have always the thought “Valentina”, the barroom Stones-y type romp is actually about her and not the character in a trailer by the sea, whether it is or not, only she knows.

“Live In Europe” is about an hour long. It is marvellous, and the reason it’s marvellous is shown in microcosm by the last four songs. “Back To LA” has a kind of laid back, Eagles vibe, while her interpretations of “Ready For Love” and in particular “Black Betty” – delivered here acoustic and raw – show her skill at picking covers, before “King Of Rock N Roll”, probably the stand out moment from “….Never” is given a rearrangement.

All four are superb. All four different. Yet, all four, somehow fit in perfectly.

That’s what gifted artists do.

Go and see Sari live whenever you can, just remember: don’t sit at the front and make eye contact with her if you are a shy and nervous sort…..