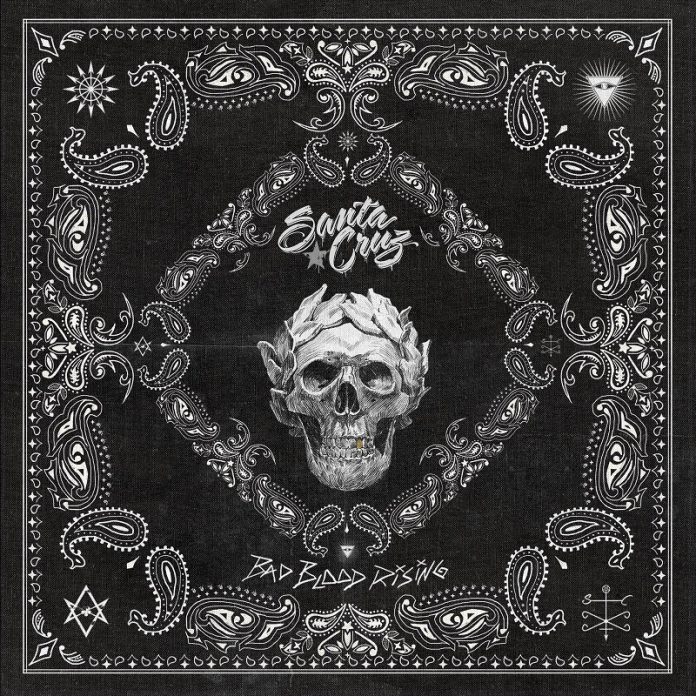 In the early 1990’s, on one of the first real long form videos that showed you it wasn’t all fun being in a rock n roll band, Jon Bon Jovi discusses Bon Jovi’s lack of critical acclaim. “The way I look at it,” he says, “is that I am so far out of fashion I am in fashion….”

Then on their classic “Heartbreak Station” record, Cinderella offered the thought that “The More Things Change, The More They Stay The Same” as a first track, while in 1991 long forgotten (by everyone except MV) glam Herbert’s Tuff, made their major label debut. The title of the record kept coming into our head when listening to “Bad Blood Rising.”

What Comes Around Goes Around.

The point to all this is simple. Whatever trends the magazines tell you are important (djent? Pur-leese!), whatever was supposed to happen the minute Nirvana released Nevermind, the fact is that eventually, there’ll always be glam rock.

Finland’s Santa Cruz know this. They grew up with Motley and G N R on their minds, now for their third album, the band dubbed by Rolling Stone magazine as “One of the Top 10 bands you need to know in 2017” are setting about putting their own stamp on things.

“Young Blood Rising” is ample proof that they can do just that too. If this is AOR then it is AOR through gritted teeth, and its huge breakdown is designed to fill modern arenas.

“River Phoenix” – which starts with a police call to the Viper Room – is full of talkbox, but it does things with a fists in the air glee. “Fire Running Through Our Veins” finds a primal groove, and is sort of like Shinedown – notwithstanding the fact that Shinedown have no discernible balls and this instead comes in with its big dick swinging.

Quite simply there is nothing demure about this whatsoever. You’d call “Drag Me Out Of The Darkness” a ballad, but it’s not fragile in any way, and it has a soaring solo. To be fair, “Breathe” is actually gentle. Opening with a whistle is bound to recall “Patience” and so it does here, but even here you can sense that the thing is desperate to shake the foundations.  Palette suitably cleansed, “Voice Of A New Generation” crushes. Sounding a little like Skid Row would if they had released that debut now instead of 89.

But the thing is where many would descend into pastiche, Santa Cruz absolutely do not. “Back From The Dead” is made for playing live, and positively funky, and has a stab at current affairs. “Fuck Donald Trump, give me Bernie Sanders” sneers Arttu “Archie” Kuosmanen at one point.

If that might suggest that this is very much of its time, “Bad Habits Die Hard” is like a mash-up of a modern rock song by one of those bands of kids in skinny jeans and a sleaze rock band from the Rainbow in the 80s.

That is the tightrope the band walks pretty well. “Pure Fucking Adrenaline” has the intent of a Megadeth outtake from the Countdown To Extinction era, while “Get Me Out Of California” is a no fooling power ballad. Almost like their “I Remember You” moment if you will, it showcases a band of proper maturity and songwriting ability.

As much as this is a record from the 21st century with a modern outlook and sound to match, it wouldn’t have existed without the bands of the 80s and early 1990’s. In that spirit then, here’s a reference for them to ponder. “Bad Blood Rising” is their third record. Slippery When Wet was Bon Jovi’s. Does stardom await? Well, on that it’s fair to say Santa Cruz are livin’ on a prayer.