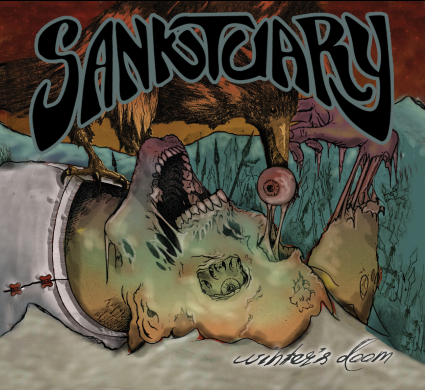 Oh thrash metal, oh how we loved you back in the day, and oh how you lost your way in recent years.

Recently, though, there’s been rumblings in the old boy, and thrash has remembered what it was, before it got bogged down in sub genres and growling vocals. In short, if bands were, it seemed, almost embarrassed to thrash like a maniac, there’s been loads recently that have laced up their hi-tops and got it on, dude.

Let’s be honest here even the “K” in their name – and my, how thrash metal bands love the erroneous K, even Brit kings Eradikator give this one a bash – tells you that Sanktuary couldn’t care a jot for some ridiculous “post” this or “post” that derivation, this is thrash metal, baby, right down to its putrid soul.

The seven tracks that make up “Winters Doom” aren’t reinventing any wheels, but then, why would you reinvent anything that has already been perfected? Of course the counter argument to that is that if it’s already been perfected why bother trying? But that rather misses the point. Indeed, for the entirety of “Winters Doom” the Canadian four piece sound like they are having so much fun making it probably should be illegal.

“….Doom” understands a few things. It knows that thrash metal should be fast, nasty, snotty, brash and in your face. Preferably too, lyrically it should talk about war, the media and some kind of violence. It does all of these things within about 90 seconds of the opener “Space Race” and just to prove this ain’t a fluke, it fair old bursts to rock n rage on “Wild Is The Wind”. Anyone hoping for a cover of the Bon Jovi from 1989 will be disappointed (that was just you – Ed) but in its place comes track that contains more guitar solos than you can shake a Les Paul at, as it hurtles along with a vibe like early Exodus might have mustered back in the day.

There’s a couple of times when things slow and add what might be termed a kind of Slayer type ominous feel, the pick of these is “Curse Of The Vermin”, largely because it quickly eschews any notion that thrash metal should be slow and instead gets its attacks in first.

The title track is a lesson in this music and how it should be done in 2015. There’s no bullshit, no orchestras, no “maturing” and instead it’s just filled with all kinds of evil intent. Elsewhere “Open Your Eyes” puts the world to rights and is every inch Sanktuary’s state of the union address, while “Corpse Blockade” sounds exactly as you’d want it to and exactly how you’d expect.

And that, right there is the nail on the head. “Winter Doom” is never going to change your life, it was never supposed to. It might, though, make it better for a while.

Cos, horns up or hands down, it’s rather good.