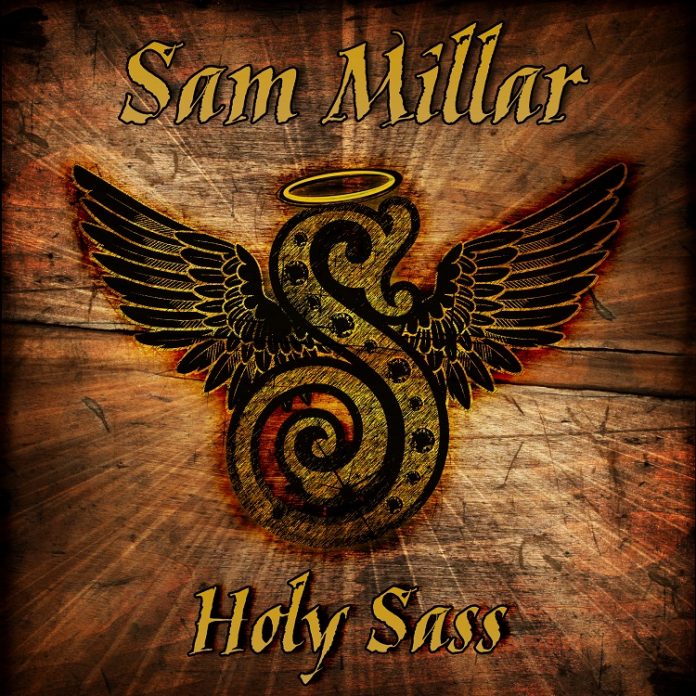 You may not know Sam Millar. If there was any justice you would.

He’s the guitarist in Bigfoot, who should be huge. This is his debut solo EP (I think?) and in some parallel universe then it would be as eagerly awaited as when Bon Jovi’s then guitar god, Richie Sambora stuck “Stranger In This Town” out back in 1991 and I – quite literally – stood outside Music Junction in Solihull to wait for them to open the shop to get it.

But this is the real world and it’s not. Record shops barely exist, and we’ll probably stream this on Spotify if Sam is lucky. Which is yet another reason why the modern world is crap.

However, mention of Bon Jovi is deliberate. Bigfoot have a bit of that about them. On “Holy Sass”, Millar has ramped up the pop to go with the rock.

“Eyes” in honesty, sounds like one of those demos of Jovi’s we used to collect in record fairs, and as catchy as it is – there is even a soul handclap at the end of the solo – it is most definitely not rock n roll.

Scanning the song titles, as you do when you look at these things, I got to “Cyber Girl” and thought “yep, ok this will be about fantasy”. It is, but in the most sweet and innocent way possible, and is most certainly not about what I was up to in 1999 while claiming I was playing Championship Manager at 3am……

In many ways “innocent” is a good way to sum up “….Sass” because it isn’t all that sassy at all. “Let Me Yet” is a school disco song from about 1986, and it is meant to be too, you’d guess. Songs with whistling in achieved perfection with GnR’s “Patience”, but this isn’t far behind – and if you need to know how good a player Millar is, it’s here.

“Lost In Translation” is another from the 80s stable. Balladry, something like “Every Rose Has It’s Thorn”, and the thing ends with “Strangers” which is the most unashamed AOR this side of Nelson’s debut record (and no one under the age of 40 is getting that reference!).

I’ve never understood why people release solo records that sound exactly like the day job. “Holy Sass” absolutely scores big on that front. A promising debut, but maybe a little more rock to go with the pop would work next time. That wasn’t what this was about though.

Previous article
REVIEW: FUTUREHEADS – POWERS (2019)
Next article
DEMONS AND WIZARDS SLING ONE IN