REVIEW: SAINTED SINNERS – BACK WITH A VENGEANCE (2018) 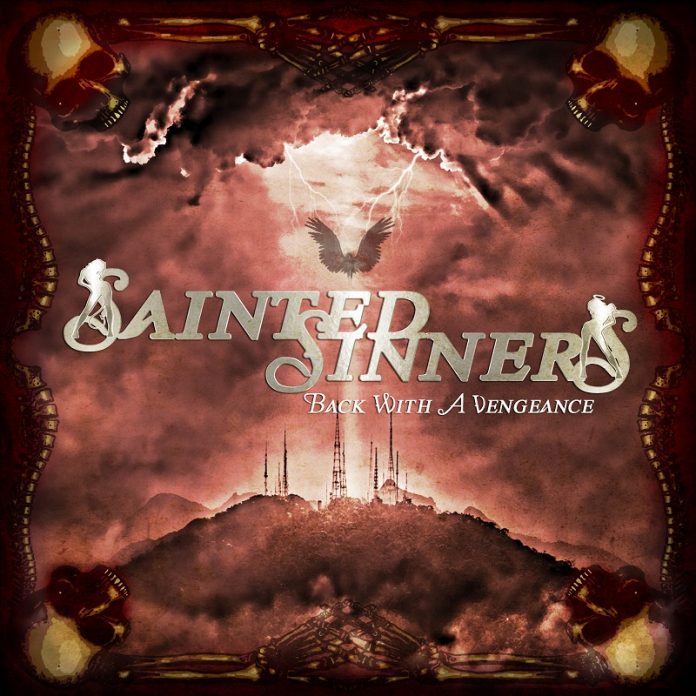 The album title sums it up.

Growing up in the 80s, I used to get impatient at the gaps between the albums of my favourite bands. Guns N Roses, made me wait four whole years, so did Bon Jovi, Def Leppard even longer.

Then you’d hear tales about the bands of the 1970s. Free, Thin Lizzy, Deep Purple, Led Zep and the rest sticking one out a year – sometimes two – and you’d think, “you lucky so and so’s” (or words to that effect anyway).

It turns out we weren’t the only ones who longed for it either, because Sainted Sinners do more than sound like the greats. They are imbued with the same work ethic too, because not even a year after we waxed lyrical about their debut album (“believe the hype”, we chirruped) they are back for round two.

And, you’d best believe they are rather good at this lark.

Opener “Rise Like A Phoenix” sets down a marker early on. Eight minutes long – give or take – it begins with almost what you’d describe as an overture and still manages to be a stomping rocker. Stomping rock, essentially, is what Sainted Sinners deal in. Singer David Reece (once of Accept) plays an absolute blinder, there seems to be a real glee in his scream at the start of “Burnin’ The Candle” while the song itself is largely the best thing that Sammy Hagar era Van Halen didn’t release.

Guitarist Frank Pané is in stunning form throughout, and you’d imagine he knows that the opening to the title track is something akin to Eddie Van Halen. Anyone sniping at this is probably just jealous that they don’t have this much talent.

While many of their songs deal in thunderous rumble, “Tell Me I Was Wrong” is a slower, bluesier affair, one that might know its way around the odd Bad Company and (early) Whitesnake record, but whatever they do, these sinners do it right.

There’s a quality here, be it in the Eastern tinges of “Nothing Left To Lose” or the swirls of “Waiting Till The Countdown” that few can match – never mind a band that is only on their second record.

That might just be because all the members of the band play their own distinct parts in the sound. And even with noticeably less keyboard than the debut, when it is used, then it does it perfectly. Jon Lord would be proud of any band who does what they do on “Let It Go”, to be sure.

“When The Hammer Falls” has a touch of the bombast of Rainbow, and the huge stadium shaker that is “Pretty Little Lies” is the sort of thing that modern day Europe do too.

The best thing about Sainted Sinners, though, is that whilst there are elements of all the bands we’ve mentioned in the sound – and you imagine that such comparisons would be welcomed rather than shied away from – they are very much their own men. To that end they end with “Gone But Not Forgotten” which adds a whole heap of soul to things.

That song also contains one of the lines that sum this album up. “Rock n roll will never die” offers Reece before the solo. He’s right too. At the start of the album there’s another line that explains why. In the middle of “…” Phoenix” they suggest that “if you ain’t the got balls you ain’t on my team.” And its hard to argue. “Back With A Vengeance” is a band that are just that. Deadly Sinners indeed.

Previous article
BAND OF THE DAY: WE HAVE THE MOON
Next article
Beatrix Players 11/02/2018 @Robin 2, Bilston