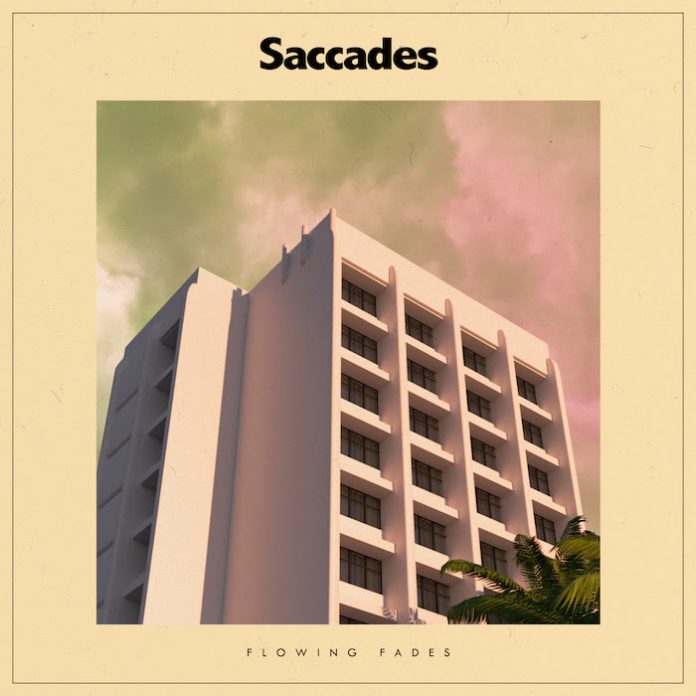 Saccades is the solo project of the Manchester-based musician Nicholas Wood who’s best known for making up one half of The KVB, a post-punk / coldwave duo.

‘Flowing Fades’, the second Saccades album explores, among other things, the ways in which memory shapes our lives, lockdown-induced paranoia and missing live music and life on the road.

The album opens with `Islands Past` which is a real dreamy trippy musing with quietly shared vocals reminiscing on the ways in which memory shapes our lives. There`s a more synth pop dance texture about `On Your Mind` with a constant handclap sound and bassline leading you through and some jangly guitar riffs added occasionally.

`All Divided Selves` is a much more relaxed offering about two people who spend every week falling out and then getting back together. The title is taken from a 2011 film by Luke Fowler about the psychiatrist R.D. Laing. We have a slightly more musically upbeat number with ‘Like Everyday’, although the subject matter is a little downbeat. A sort of lockdown-induced paranoia based on hearing stories of people spying on neighbours during the lockdown.

`Tonight We Can Expect The Same` is a stripped back ballad of sorts with acoustic guitar and fragile vocals but later has some electric guitar chords and piano keys added to the mix. There is ironically a blustery texture to `Breezy` a delightfully light quite electronic piece which enjoys some shared / harmonised vocals from the singer`s wife Kat Day. It really put me in mind of the stuff that Bernard Sumner and Johnny Marr did with their band Electronic.

‘Day Dreamer’ had a wistful cinematic feel about it. A track that is said imagines “a pandemic of apathy sweeping the world, where after being bored for so long, everyone is content to keep doing nothing forever.” A song that echoes a brief return to the singer`s hometown comes with `Older Than Tomorrow`. It tells of returning to the place you’re from and realising that its possible for nothing and everything to change at the same time. It`s a quite trace like ambient composition that is enhanced with the addition of vocal harmonies, again from Nicholas`s wife.

Heat` came from the singer having taken touring for granted and his yearn to return to live shows having spent the last decade touring pretty much non-stop around Europe, North and Latin America, Asia and South Africa with The KVB. It has been described as having been influenced by a mixture of early house music and yacht rock and that is a pretty fair explanation. A short enjoyable musical interlude follows with `Endless Spring` that has snippets of swirling water or the sea combined in this ambient submission.

We return to the charming, dreamy synth pop of earlier with `Flowing Fades` which had me drifting in and out as it progressed. The album closes with `Lady Blue` which the singer describes as an ode to Serge Gainsbourg that’s shot through with the dystopian themes on display throughout. “I did my best to recreate the orchestra strings on Gainsbourg’s ‘Histoire de Melody Nelson’ using various string synths, including my Elka Rhapsody, which I hadn’t used for years. The lyrics are about someone going to bed and knowing the apocalypse is about to begin and not knowing if they will see the morning.”

There was a lot to enjoy with ‘Flowing Fades’ and the singer has related “I wanted to create something soothing and immersive. Music for escapism, which can be listened to at sunrise or sunset. Even though it’s lighter and mellower than my usual output, I feel like there are strong hints of melancholia in there too, reflecting the world in which it was created.”

So, if you want something to just chill out to and take you on a trip away from the stresses and strains of your life for forty minutes then this is ideal. Just turn on, tune in, chill out and relax.