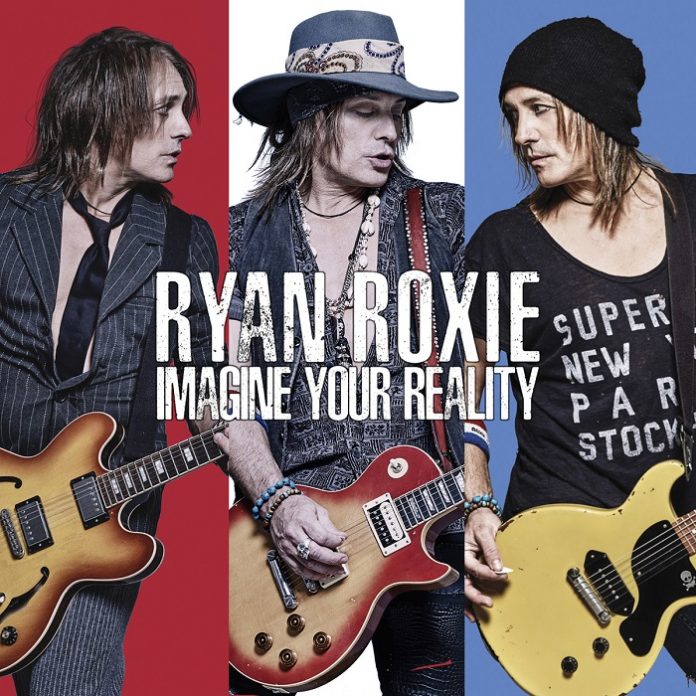 Let’s be honest, if you can get an actual Cheap Trick member to sing on your solo album, and you spend your day job next to Alice Cooper, then you’re doing something right.

In that context, Ryan Roxie doesn’t have to record solo records. But he needs to. He’s got the talent, the creativity that must be satisfied, and on “Imagine Your Reality” he does, by in his own words: “ [keeping] the spirit and power of the 3.5 minute rock song intact as well as keeping the dream of guitar-driven music alive and well”.

He does. But he does so much more. As the cover suggests, there are many sides to this.

The lead track, “Big Rock Show” is a 95 second maelstrom to start things off, and in so doing sets the tone for what follows. Bubble gum glam rock, but with a hard exterior, the rest of the album – wherever it goes – remembers those things and keeps them at its heart.

For example “Over And Done” – the first single from the record – is a southern fried thing, but done through the prism of Cheap Trick rather than Skynyrd, and speaking of Cheap Trick, Robin Zander confirms his god-like status on a cover of “California Man”, that sounds so raucous you’d swear that Jerry Lee Lewis himself was playing the piano licks here.

Roxie follows this up with the lip-curl of the brilliant “To Live And Die In LA” and – with due apologies to all concerned if I’ve got this wrong –  I’m prepared to wager that scores are being settled here. “Are you still thinking ain’t life grand?” snarls Ryan. “so what was the point in fucking over the band.” Now, I’ve got no wish to fight a lawsuit with anyone, so if you want to see what this might be about then have a look at the name of the album Roxie made 18 years ago and who he made it with….

Moving on, the rest of the record isn’t as contentious. Indeed “Uh Oh Song” is swampy blues and an example of the breadth and skill here. There’s a touch of Ian Hunter in the vocals of “Me Generation” – a pretty vicious condemnation of modern youth – and the low-slung Stones-y lead of “Look Me In The Eye” is superb, and that’s before you factor in the point that any song with handclaps in rules.

Actually, it is a testament to the absolute ability of both the star and the band that “….Reality” manages to occupy so many spaces while still adhering to the framework it has established. “Hearts In Trouble” has a Latin tinge, and is slinky as well as being catchy and fun. Both those words could easily be applied to the trashy masterclass of “Nevermind Me” with ease too.

The last one is perhaps the only moment of introspection. “God Put A Smile On My Face” has a hint or two of Johnny Thunders and is built around an acoustic riff, and casts Roxie as a contented soul.

Well he might be, because these ten songs are pretty special. The reality, if you will, is that the spirit of rock n roll is alive and well – and on “Imagine Your Reality”  Ryan Roxie distils that unashamedly to its purest form.