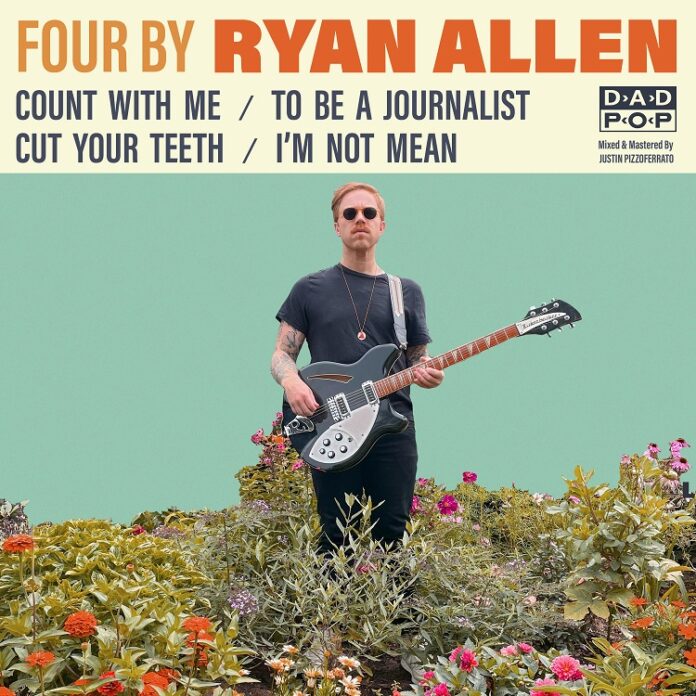 Ryan Allen is a singer songwriter who fronts a band called Extra Arms who are a loud pop band from Detroit, Michigan. They were formerly known as Ryan Allen & His Extra Arms but has transformed from a solo project to a fully-fledged rock outfit known for writing crunchy rock songs in the vein of Superchunk, Sugar and Teenage Fanclub. Ryan has just released a four track solo EP `I`m Not Mean` which has been referred to as four jangle-heavy songs inspired by REM, The Smiths, Sarah Records, and reverb.

This extended play opens with `Count With Me` which the singer has said it`s basically a love song that almost acts like a checklist or job interview for a perfect partner. What’s your name? Where do you live? What’s your favourite record?, you get the picture. It`s a tongue in cheek musing on people’s requirements for a partner but why do we need to know all of this up front when starting a relationship? Does it matter what somebody’s favourite record is? Maybe? A strummed guitar and light drumbeat lead us into this delightfully dreamy offering which will have your toes tapping along in time with this three minute marvel. Perfectly infectious. Oh yeah, in case you were wondering Ryan has a special someone and he admits “she’s wonderful!”.

We have a fairly fast paced track with some intricately played guitar chords with vocals swimming atop with `To Be A Journalist`. This musician majored in journalism in college so it`s no surprise that he has some thoughts on the industry and how it`s changed. The number questions the influence that commentators have and wonders how we got to a place where Tucker Carlson and Sean Hannity somehow are able to tell untruths that can literally dictate the health strategy of an entire nation. I always find that getting a point over via a song, especially one as catchy as this, is far better that just ranting.

I thought `Cut Your Teeth` was amusingly introspective. The singer has a ten year old son and it reflects on the fact that he`s growing up fast, will become more independent and sort of coming to terms with that. It a breezy irresistible pop outing with some jangly guitar chords and sweet vocal harmonies along route. I`m sure , like me you`ll get sucked into singing along with the “ooh la, la las” at the end. This four-tracker closes out with title track `I`m Not Mean` and it`s a composition about how the narrator is misunderstood when all they want to do is grab a little space, a little peace and quiet, a bit of me time. It`s a gently shared piece which has a captivating string arrangement throughout. I loved this track and felt it was kind of Billy Bragg meets Buddy Holly.

There was so much to enjoy on this extended play where Ryan played all the instruments.

It certainly brightened a cold and dark winters day for me here in England`s second city.

If you are a fan of bands like The Posies, The Lemonheads and Buffalo Tom, check out Ryan and also Extra Arms, you`re sure to enjoy them.