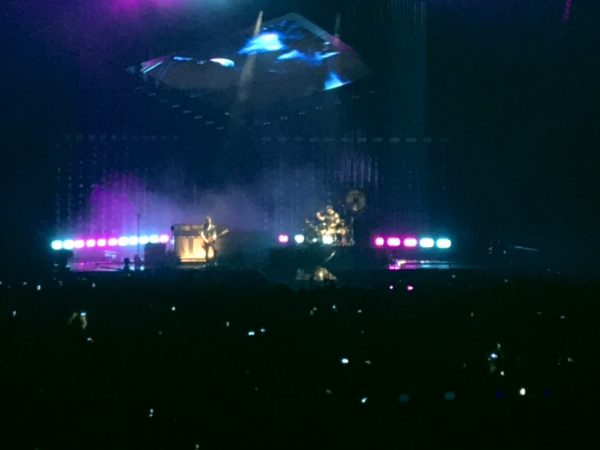 Birmingham figures it out as Royal Blood play their biggest show….so far

Often, when band’s stand on the edge of a stage and say something like: “thanks Birmingham, it’s been a great night,” or whatever, it sounds like a cliché. MV saw Metallica a couple of weeks ago and James Hetfield explained how much he loved us, for example (he’d earlier called the Genting Arena – capacity 15,683 – a “little” place) and yet somehow when Royal Blood bassist and singer Michael Kerr says: “Birmingham, this is amazing. I can’t believe this, thanks for thinking that buying a ticket was a good idea….” there’s a look of incredulity on his face that is so very, very real.

Kerr is the frontman of a two-piece band from Brighton and, MV will be willing to bet that at no point were Royal Blood supposed to get this big.

To understand their journey, we’ll give you this story: On November 4th 2014, we’d planned to go to the small room of the Institute, in the city centre up the road to watch our fave Bristolian madmen, Turbowolf. They were opening for a band we hadn’t heard of. Assuming we could turn up on the night and pay on the door we didn’t buy a ticket. It sold out a couple of days before. The headliners that night were Royal Blood.

3 years and 14 days later Kerr is saying those words  at the Arena, Birmingham and it is fair to say there ain’t much space left in a venue that holds almost 16,000 people.

The fact is that Royal Blood have done it. They’ve done what rock bands aren’t supposed to do and crossed over. From our vantage point in the accessibility seats on the walkway around the venue tonight MV can see the crowd. There’s blokes in Iron Maiden shirts, the classic rock fans with the Deep Purple garments they bought last night right here (considerably fewer than this were here too), but there’s also young kids at their first show, older people and hipsters. In short, they have whatever it takes.

But then, should we be surprised? After all, doing what they aren’t supposed to is rather Royal Blood’s stock in trade. Bands aren’t meant to be a drummer and a bassist, and a bass ain’t usually sounding like it does here.

But they pull it off superbly, and you’d absolutely best believe that this is an arena rock band – with all that entails. They are here with a light show, a slick stage and songs that connect with people in their thousands and thousands.

There is nothing subtle about it either. It is loud, snotty, in your face and resolutely bombastic from the minute “Light’s Out” kicks in, to the second “Out Of The Black” finishes almost an hour and a half later.

Kerr relaxes visibly on “You Can Be So Cruel” wandering down his ego-ramp to greet his people, and the superb “I Only Lie When I Love You” sees drummer Ben Thatcher – who is on top form throughout – smash a cowbell for all he’s worth.

That is a highlight, but it is an odd point that Royal Blood are in such a bubble right now that the songs almost don’t matter, this is their victory lap and they know it – by the end so does everyone else.

A couple of backing singers give “She’s Creeping” a funky touch, “Little Monster” is huge – Thatcher’s solo after is even bigger, and “Hook, Line And Sinker” locks into a rare groove. More than that, though, later in the set there’s plenty of light and shade, “Sleep” is the closest they get to a ballad and “Hole In Your Heart” sees Kerr switch to keyboards too.

Then there’s “Figure It Out”. Ending the main set with it and watching a room full of strangers go this crazy is a mind-blowing thing for them, no doubt. It is their “Livin’ On A Prayer” moment, if you will. The exact point when it stopped being their song and became everyone’s is about three minutes in when the lights go up.

They’ll need to get used to it. This might be their biggest show to date, but you can forget that, they’ll headline Wembley in five years. They are Royal Blood. No longer just a two-piece from Brighton, they are a rock n roll phenomenon. No one is going to stop them.