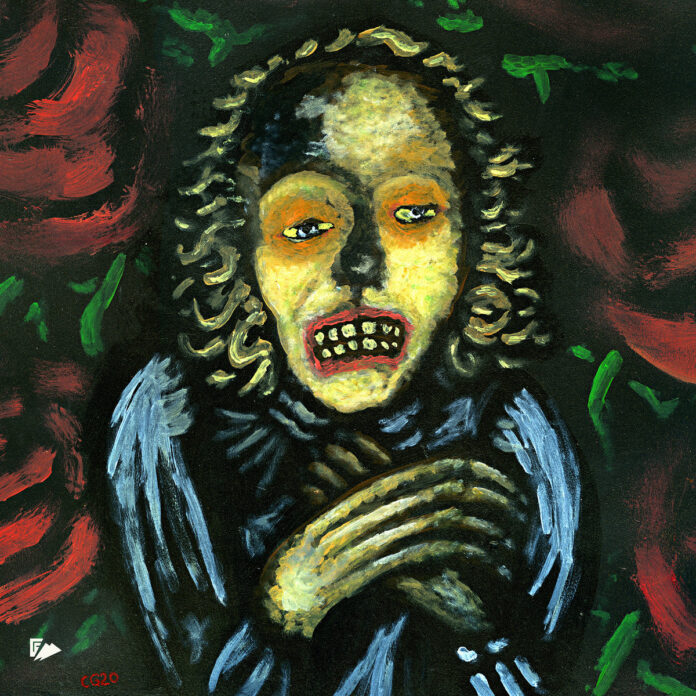 “We play a deranged version of Classic Rock.” Those words came from Harriet Hudson-Clise. She sings in Rot TV. This is their debut record. I am, in honesty, tempted to stop this review there, because it does seem to explain things pretty well.

Thing is, that the good people at TeePee Records probably expect more – and as this website specialises in deranged reviews that make no sense, lets go!

In all seriousness, this is one of those records that you’ll know instantly whether you like or not. That’s the case with a lot of the stuff that this label does. The opener “Ready To Die” will do you. Some kind of punk rock version of Chuck Berry, like a boogie in the Hells Angels clubhouse. Guitars slash and burn on some kind of Blitzkrieg, its fuzzy, fast, as scrappy as anything on one of those late 90s Scandi punk records I love, and then Harriet yells “I’m ready to die”. For what, is not clear. Rock n roll, probably.

“Crying Shame” carries on the vibe. Except there’s a subtle change. The vocals on this one sound like they’ve been sniffing glue with The Damned, and “Slashin’” on which the vocals claim that “something strange is hiding” and the cartoon imagery is a match for anything Wednesday13 does.

And that phrase, “something strange is hiding” might as well be the strap line for the record. “Goodbye” (hook line “I don’t need no friend, not a friend like you”) sounds like she’s made a deal with a Devil to have you killed, while “Oblivion” is a statement. The band claim a love for Blue Oyster Cult, and this is the one that proves it. Psychedelic, swirling, it is a soundtrack to some nightmare that I don’t understand.

The cover is brilliantly chosen. “I’m Not Like Everybody Else” by The Kinks is about the only thing that could nail this band. They aren’t like anything out there, even “Mothers Chain” which starts off like its going to be a ballad ends up sounding like a garage rocker.

And garage rock is sort of the thing that underpins all this. The five piece 100% dress in black, and the guitar duo of Graham Clise and Robert Muiños are 100% the type of people that have their guitars playing way, way below their knees.

“Feeling Dead Alive” speaks for itself, mostly. “I got a troubled mind” goes the first line, and your response is perhaps, “you don’t say”. But make no mistake here, whatever fun we’ve had with this, this is a band that is extremely good at what they do and extremely focussed on doing it.

“Stone” and the brilliant pure rock n roll of “Nervous Wreck (conjuring up thoughts of “Damage Case” by Motorhead) ensure there’s no let ups and you can only imagine the visceral rush if ever they were able to tour.

There’s not a lot of texture in this, that’s not a criticism, merely a fact. Some albums are a journey, this one feels like a pummelling. “Sinkhole”  and “Meathook” continue the theme of being rock n roll from what are clearly rock n roll lifers, but its rock n roll with an edge. Like it’d bring a knife to a gunfight if it got the job done quicker.

Rot TV claim to be a “Supergroup” – maybe it’s a lack of knowledge on my part but I am not familiar with anyone here – whatever, they’ve come out of the swamps of Melbourne (in truth I don’t think there are any? It just sounds like they lurk out there in the darkness ready to scare anyone that happens across their path) and “Tales Of Torment” is the result. It’s a mad, fun ride. The kind of thing that’s so scary that people want to go back on.