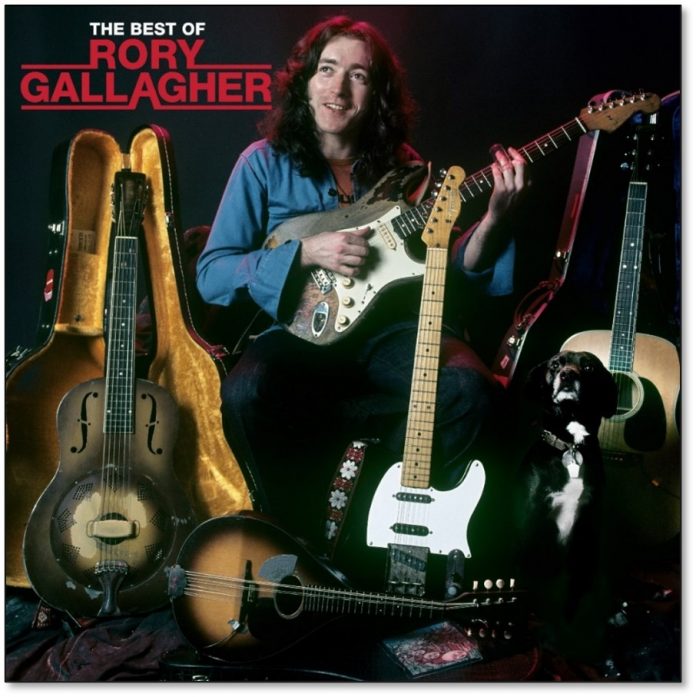 This is one of those reviews that I can only write from my own perspective. I can’t claim that I saw Rory Gallagher play live and given that I have never picked up a guitar, I can’t claim he influenced me either.

What I can say is this: I was in the middle of my discovery of Joe Bonamassa in about 2008 – and that was where I start with “the blues” – and was boring a friend of mine about the subject. I saw him the week after and he handed me a CD that he’d made for me. “You want to hear the best blues in the world?” he said. “Stick this on.”

On the handwritten CDR was simply: The Best Of Rory Gallagher.

He wasn’t wrong, my mate. Rory is the best, he’s a genius. It seems anyone who hears anything he does thinks that. The best ever, no trouble – and it seems to me, very little debate.

That’s probably why “The Very Best Of Rory Gallagher” must be such a hard thing to put together. 30 tracks here (on the full version) and it follows on from “Blues” last year, and this years phenomenal live record “Check Shirt Wizard” (which might genuinely be the greatest live record ever made. This one attempts to bring all the facets together. The blues, the rock, the songwriter, the incredible playing and the jazz elements. By and large it does it as well as anything could.

The main selling point of this, for the collector, is a version of “(I Can’t Get No) Satisfaction” recorded with Jerry Lee Lewis. An outtake from the latter’s legendary  ‘The Session… Recorded in London With Great Guest Artists’ LP. From 1973, it is magnificent. Full of Rory’s insouciant cool as he takes the song merely as a base, a starting point, and Lewis feeds off it.

Is it worth investing in the full thing if you already have the songs? Maybe actually.

If you don’t, then marvel at the other 29, because they are all, exceptional slices of how this stuff should be done. Starting with the raw, proto rock of Taste’s “What’s Going On”, this is a genuine career retrospective, taking in the sun-kissed “Wheels Within Wheels” from 2010’s “Notes From San Francisco” (15 years after his passing) as well as everything in between.

That means “Shadow Play”, the chugging slice of brilliance, but it means “Loan Shark Blues” too, and its sense of raw despair, it means for every “Calling Card”, one of the absolute copper bottomed standards, there’s a “Children Of The Everglades”, a kind off floating one (which has always had a bit of The Doors about it to me), or the epic, discordant jazz flavours of “It Happened Before, It’ll Happen Again”.

Using phrases like “the classics” is odd here, because they are all – in their own way – just that, but I guess as long as “Bad Penny” and so forth are here, then we all understand the subtext. Thing is, though when he stretches out with “Walk On Hot Coals” or “Ghost Blues” then, surely, he’s even better. And the closing track, “Catfish” with its wailing lead at just over eight minutes is the longest, and perhaps most labyrinthine of the lot.

With something like this, there will of course, be your favourite that’s missing (“Bullfrog Blues” for me, as it happens) but that’s not really the point. The point is to celebrate the greatest. “The Best Of Rory Gallagher” does that just fine. My advice? If you are new to his work, use this as your starting point and let it take you on the most incredible ride.