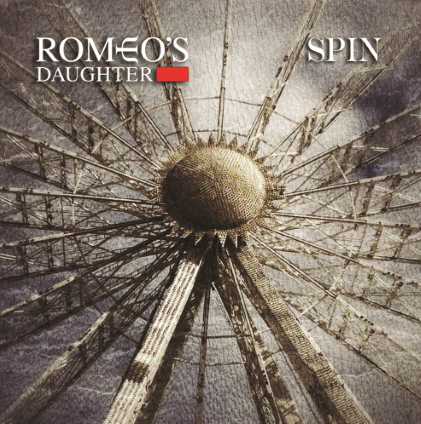 Love is, as no less an luminary than Belinda Carlisle observed, a big scary animal. The twists and turns of matters of the heart, though, are good for one thing: they keep melodic rock bands in lyrics time after time.

On this, the fourth album from Romeo’s Daughter and the second since they returned after a twenty year break, every type of love and situation involving love is discussed. Which means largely that every single AOR/melodic rock box is ticked at some point.

When they were appearing with all sorts of bands and singer Leigh Matty was appearing on the Raw Magazine and Kerrang! women in rock calendars in the late 1980s (Belinda Carlisle, as the opening might indicate was always this reviewers choice – [Stop it now Ed]) they gathered themselves a reasonable following by being rather good at what they did.

Romeo’s Daughter also deserve credit for not trying to modernise their sound at all on “Spin.” This is not one of those records where a band from the past “goes grunge” or something equally dreadful, rather it is 10 songs that sound exactly as a melodic rock band should.

“Touch” has echoes of FM (the kings of this stuff in MVM’s book) but is marked out by two things that set this up as a rather superior go at this sound. There’s an excellent chorus, and then there’s Matty herself. A breathless, urgent – and yes, sex filled – delivery, as she almost pants her way through the verse.

“Already Gone” has a more conventional delivery, complete with chunky, chugging chords, and the years best double entendre which sees Matty – who is every inch the star of the show here – explain that she “can’t make love to ya, with one eye over my shoulder,” fnar and indeed he he.

There’s a couple of almighty tear-jerkers, naturally. “Love Will Come To Those Who Wait”  is all grandiose pianos, and the shimmering “Didn’t See You Coming” could comfortably be a radio two staple.

On a record with no pretensions at all to be anything it’s not, “Perfect Plan” stands out, here the heroine is “a single girl with nothing to lose” and the music reflects this upbeat stance, and “Enemy” (where they should be making love and not arguing, apparently) is like being transported back in time. If you thought they didn’t write them like this anymore they do. Romeo’s Daughter do.

And that’s about all you can add. Because “Spin” isn’t about trying to “crack markets” or reaching a new generation. All “Spin” wants to do is be a old-school melodic rock record. It does that job very very well indeed.