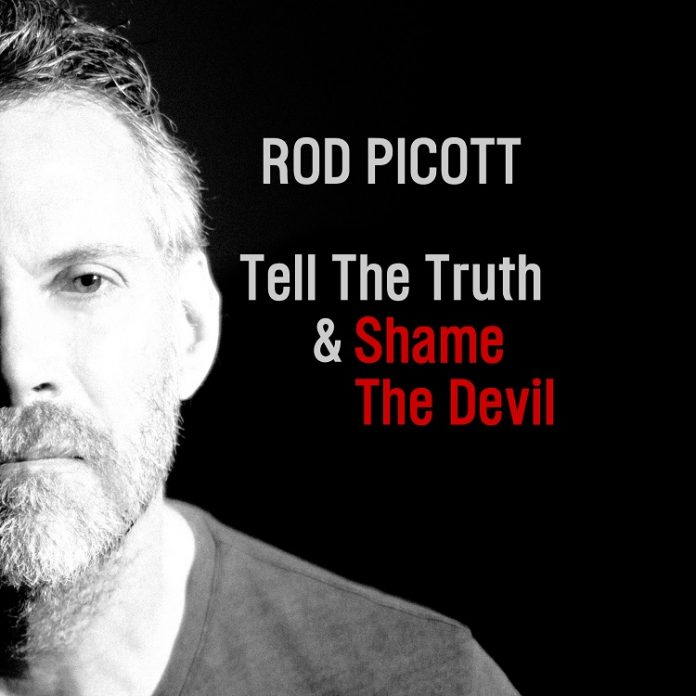 Two albums in particular always come to mind when I think about acoustic records. One, is a Dog’s D’amour record called “Graveyard of Empty Bottles” and the other is “Nebraska”.

Both in their own way changed the way I thought about things. The first one was purchased at the height of a glam rock obsession and showed me that sleazy music didn’t always have to be loud. The second was and still is in my top two Springsteen albums. The fragility, the personal nature of the songs, the claustrophobic feel, the suggestion actually, that you were listening to some kind of inner monologue. It set me off on a exploration of that type of music that goes on to this day.

About 18 months back I reviewed a Rod Picott collection: “Out Past The Wires”. Instinctively liking him because he became a musician late in life and to come out of his rut, the album, as I put it: “ [means] all those who know there is no light at the end of the tunnel have found their soundtrack.”

“Tell The Truth And Shame The Devil” – and this is not meant as a criticism at all – is so bleak that it makes that one look like it could be played at children’s parties.

The reason for that is the health scare that Picott suffered as he contemplated the album. He disappeared on his own and recorded the album himself.

The results are unflinchingly dark. The first song “Ghost” sets the tone. “I drink myself to sleep at night, there’s no point pretending that I don’t” he offers in the first verse, before going onto get more analytical on “Bailing”, where he tells the tale of his working class family, “I was a poor man’s kid, in a thrift store shirt” is a line that chimes amongst all the others here. Here is the kid looking for escape, through the eyes of the man who maybe still is.

On the sleeve notes, Picott is quick to point out that “Mama’s Boy” (written with his friend Slaid Cleaves)  is not autobiographical, but still there is no doubting really that the questions it asks about childhood, masculinity and cruelty are from the heart. It is an example of Tom Waits’ style fine songwriting.

“Mark” is perhaps the most harrowing. A kid in school committed suicide and this is his story. The same thing, actually, happened at my school, growing up and the emotions spoken of here resonate still.

“Spartan Hotel” is apparently a track that Picott has had knocking around for a couple of decades and its colourful description  of the nefarious characters who frequent the establishment are washed down with some superb harmonica and the thing is probably the highlight here to be fair.

Picott, though, whatever he does is a fine storyteller and “Too Much Rain” is exactly what challenging Americana should be. And if you thought, from the title and the gentle opening strands of “A Perfect Light” that it was going to provide some sunshine, you’d be wrong.

The way he delivers these lines is incredible. “I spend half my life….trying to keep the gun out of my mouth” he sings on “38 Special And A Hermes Purse” and its as matter of fact as it gets. There is something about this type of folk that always seems drawn to prisons, and “80 John Wallace” is definitely from that place, and the exquisite harmonica on “Guilty Man” is perfect as it shines a light on the longing, the hopelessness, even, that is felt.

“Sunday Best” is almost whispered and sounds so fragile it will break at any moment, and the lament on addiction that sees “Folds Of Your Dress” say “right now, I am a godamn mess, set you free like I did the rest” is so heartbreaking that you almost feel like you want to reach out and help.

The record begins and ends with a rumble of thunder and the pitter-patter of driving rain. The storm that is in-between may sound gentle, but goodness me, strip it away and it is anything but. The devil is in the detail.