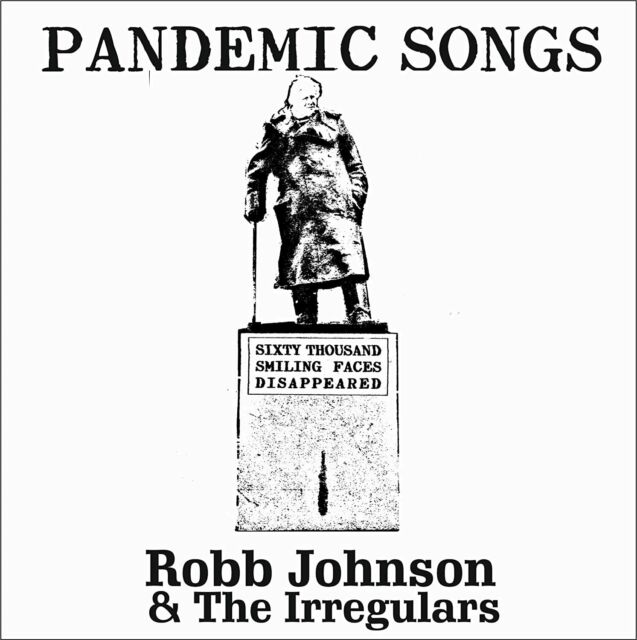 An interesting concept this. On one hand, you see the name “Pandemic Songs” and in honesty you think “do I really want to be reminded of what we are living through?” Then on the other, isn’t this exactly what singer/songwriting should do? Shouldn’t it document the times in which we live? Some of Billy Bragg’s best stuff is when he does a topical one, Beans On Toast is good at it, too.

If ever there was an artist, though that was made for the task, it is Robb Johnson. “Prolific” doesn’t even come close to explaining the Londoner, but he is one of the finest political songwriters that has ever graced these shores.

The 13 tracks on “Pandemic Songs” basically prove that beyond any reasonable doubt (there’s a bonus 14th with “Big Floyd” which deals with the awful death of George Floyd, clearly there’s no off-switch on the genius here).

But first, a disclaimer. They often say that your mobile phone knows things about you (its true, mine knows I am the most boring bloke on Planet Earth), but predictive text on mine is a giveaway. If you put a Hashtag on my Samsung S10 the suggestions are #JonesOut (a reference to a former Stoke manager who did get the boot, thank Christ) but crucially #ToryScum is also there. I’ve tweeted both, many times.

I add this so you can see my political perspective and I am not ashamed that I am not a member of Keir Starmer’s Labour Party, either. This probably matters because of the way it informs the way I listen to “…..Songs”, but whatever, this is a wonderful collection.

“Saint Mary” has a traditional folk air, a parable about the way it Covid-19 is supposed to have happened, but the way which Johnson sings “the accountants kept counting the dead” is truly magnificent.

The story then moves to “Monday Afternoon In The Paris House”, the 16th March. Glorious, wonderful, jazz like, it tells the story of the last gig Johnson played. I can relate. I’d been to see Stiff Little Fingers a couple of days before and, lets be honest, no one knew what the hell was going to befall us.

Yet by “422” it’s over. It’s all changed. And we are all reflecting. It has a haunting tone,  a wonderful piece of bleakness. “One More Lockdown” with its summery, almost reggae tones finds the joy in going to Tesco. And I can recall that too, but it also combines with a brilliant, withering putdown of the ruling class.

It’s staggering, really, how Johnson has mirrored everyone’s existence, “5373” is heavier, but has him longing to be in Paris, back in his normality, amidst the rising death toll.

“89p” juggles its light hearted feel with an excoriation of the piece of shit that is the PM, “Disinfectant” is the country tinged yin to its yang as it excoriates that other piece of shit across the Atlantic.

For my money, though “Pandemic Songs” is at its best when it tells the tales of everyone. “Highlight Of My Week” is happy to be out of the house and its hymn like feel perhaps shows that type of reverence,  and if “All The Bells Were Ringing” dreams were ringing deals with the dream of it being over, then there’s no doubt about the best thing here.

“Lockdown Jokes And Stories” comes away from the dream and deals only with reality. The reality that a government was complicit in killing its own people, it is perhaps the song of the year. Certainly the best song about the year, with “Victory In Europe”, not far behind, as it takes apart the jingoistic bullshit and puts it thus “once the dead become expendable they are easier to ignore.”

“The Days We Don’t Forget” has some incredible guitar on it – and I’ve been so focussed on the lyrics I haven’t really said how wonderful the music is – and “In Palmeria Square” deals with the end of lockdown through the prism of consumerism, but it finds some hope. Somewhere. It offers that too, and yet it seems so far away.

Lockdown for me, lets be honest, hasn’t been too bad. I have been paid, I am healthy, I live with my dad and its fine. I miss football, gigs, the Cricket County Championship and giving my little toddler niece a cuddle, but we’ll cope. Many won’t. Many haven’t. All have been failed by this ragbag government and the worst opposition in history. That’s my opinion and that’s how I felt listening to “Pandemic Songs.”

But every single one of us, whether you agree with my politics or not, can find our story here, on this truly astonishing record.