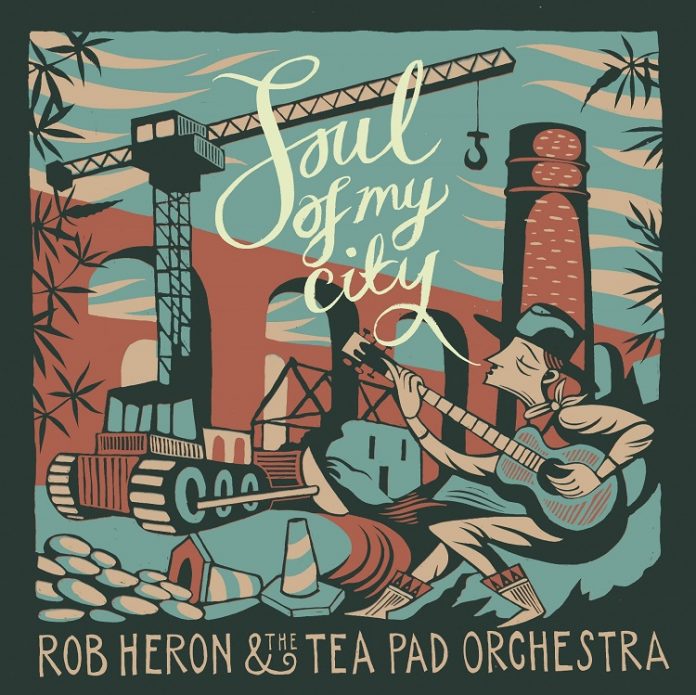 Because increasingly it seems to me, I can use my reviews as a hobby-horse, here’s another: The phrase “of its time.”

They say it about music. The spandex stuff I used to love as a kid, “oh it belongs in its day.” No, Bon Jovi’s first four albums rule, Dangerous Toys’ “Sport’n A Woody”, not so much. It just means one was good and one, well, wasn’t.

No one listens to those glorious records that Elvis, Johnny Cash and myriad others cut in the Sun Studios and thinks they sound dated (ok, maybe they do, but those people should be given a wide berth).

So, here’s my point – and good Lord I got there eventually – rather than being “of its time” how about being timeless?

Rob Heron And The Tea Pad Orchestra – with the greatest of respect to them – have constructed 12 songs here that have no place in 2019. But then, the stuff that makes up “Soul Of My City” could basically have come out at any point since rock n roll began and it still wouldn’t have fitted in.

And that, basically, is its charm.

Blokes that give a monkey’s about modernity don’t and never will make music like “Lets Go Back In Time, Man” – hell, Heron even admits it, “that 21st century music is watered down,” he sneers, over something that is reminiscent of a juke joint in the prohibition era.

The truly great thing about all this is with that one they are merely getting started. “There’s A Hole (Where My Pocket Used To Be)” sounds like all those 50s and 60s singles I used to play while pretending I was a DJ when I was about ten (I really did….)and while “Life’s A Drag” to be totally honest, isn’t going to make me want to wear women’s clothes at any point, it is catchy as the flu. Even more pertinent, it is an indication that this is a band is one which isn’t thinking along normal lines.

“Une Bouteille de Beaujolais” doesn’t half come over like an Urban Voodoo Machine song. “Holy Moly (I’m In Love Again)” conjures up images of US diners and has a wonderful innocence about it.

“One Letter Away From Lonely”, like many of them, sees Ted Harbot’s brilliant bass to the fore, while Heron’s solo makes this one too. The horns on “Like A Cuckoo” have something of Southside Johnny about them, and “Fool Talking Man” is yet another example of the wonderful tongue in cheek songwriting here. And those who are prone to saying the wrong thing (not me, obviously) will probably afford themselves a wry smile here.

Best of all, though, is the incredible title track. If many of them appear light-hearted, then this one is anything but. A vitriolic attack on the Government policies and town planners who destroy communities (the cover artwork is inspired by the gentrification of Newcastle’s Ouseburn Valley). “Where we used to play our songs is replaced by those who complain/ The kind of folks that don’t respect any culture that remains/but they’ll happily call it bohemia as they sip on their Costa Lattes/ they’ll happily close all the book stories and call themselves the literati”.

And that verse, right there, I’d contend is the key to all this. If you live a homogenised, safe world, with no desire to listen to anything outside of the top 40, or some Spoitfy playlist,  then you don’t make this record – one which has a yodelling classic in “Lonely Boy In The Dole Queue” and finishes with a nudge, nudge wink wink of a schoolboy knockabout in “Double Meaning, Double Entendre” -but you absolutely do if you are prepared to do what you love and stay true to yourself.

Rob Heron And The Tea Pad Orchestra sound like a million bands, but they mix it all together to make something that tastes unique. And if that’s an overused word, so much so that it’s almost lost meaning, then truly it is apt here. These boys, you see, they don’t belong in an era, and they’ve definitely got soul.