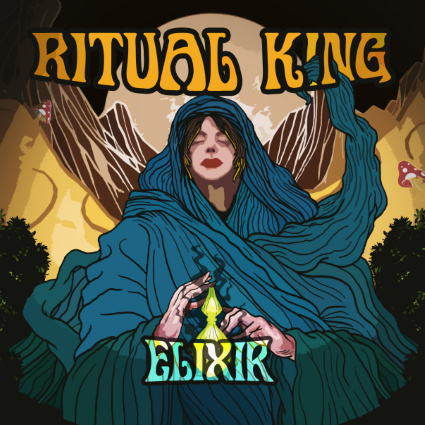 North West rockers with a debut

When we say we like threesomes around here, we don’t mean the sex tape with the Kardashian’s kind (although if Natalie Sawyer from Sky Sports News fancies coming round to MV towers, then we are cool with that….) more accurately – and frankly before we turn this website into Razzle – we do like a three piece band.

Ritual King, from the North West, are one such, and whilst they confused us with the name, this is their debut EP with this name. The moniker they go under now evoked – before we actually heard the thing – some kind of doom thing, all Sabbath downtuned riffs and songs about wizardry.

RK are not much like that at all.  Of course, they know their way around a guitar blitz, but they have also got a hard rock like ear for melody, which makes this five tracker great fun.

The trio had released one EP previously under the name Renegade And Retrospect, but this is their first recording under this name, and “Devils Chokehold” bursts out with all the youthful enthusiasm of something off a NWOBHM album from 1980 as singer Dom suggests “I’ve been sick of the same old sound, I am looking for something which cannot be found.” Bluntly – and this is not meant as a criticism – you aren’t going to find it here, either, but that doesn’t make “Elixir” any the less enjoyable.

“ISD” is catchy as you like and almost funky with its repeated refrain – not unlike something Joyrider might have tried in 1995 – “Detachment” is better still, and is actually perhaps the best song on offer, as all their ideas come together in one glorious package – and let there be no doubt if you can make the words “entrusted synchronicity” work in the context of a rock n roll song, then brother, you have some skill. bi

“Too Fast” is bluesy and a country fried stomper of a thing, showing that Ritual King have a real chance of growth, and the lilting opening strains of “Unorthodox Satisfaction” give way to a slow-building rabble rouser in a most pleasing way.

Not perfect – for example it seems on occasion that the f word is used in the lyrics to prove how rock they are – “Elixir” is no nonetheless is a record that hints that Ritual King might be capable of great things at some point in the future.