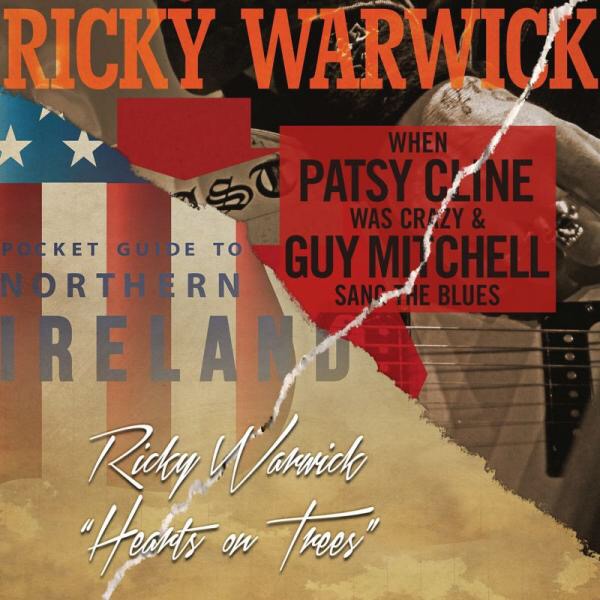 The two sides of Ricky Warwick and whichever way you look, it’s incredible

Perhaps it’s all down to making up for lost time, maybe Ricky Warwick is driven to keep working because he knows what it was like when he was in his wilderness years after The Almighty broke up and before the whole Thin Lizzy/Black Star Riders roadshow. Possibly that’s why when he’s not fronting the best hard rock band currently on the planet, he’s (usually) criss-crossing the country playing acoustic shows, and in his downtime, making brilliant solo albums.
These are his fourth and technically they aren’t new at all, having first seen the light of day via the Pledge Music site about a year ago, but “…..Blues” – the rock side – and “…..Trees” – it’s acoustic counterpart – were, quite simply too good not to get a full release.

Warwick’s solo albums have always allowed him a more personal expression. That’s even more true here, as most of the songs are written with his childhood friend Sam Robinson, meaning even on “WPCWCAGMSTB” (for short) songs like the title track and “Toffee Town” are made from real shared experience.

He’s able to call on plenty of his more famous mates too, Andy Cairns co-wrote and supplies backing vocals on the superb “Celebrating Sinking”, Ginger Wildheart does likewise on the punk n roll of “Johnny Gringo’s Last Ride” and Billy Morrison is the drummer and on the heads down ebullience of “If You’re Not Gonna Leave Me (I’ll Find Someone Who Will).”
The bands that have been the pillars of his career are represented in spirit too, “Son Of The Wind” is shot through with the same aggression and determination as The Almighty used to be, while the closing “Yesteryear” is the type of magnificent stuff that BSR have made their own recently. Interestingly the only song on this half written solely by Warwick, it’s not a stretch to think it’s the most personal one too, and there’s real feeling here as the man who lives in America and is married to an American sings “I’ve read the bible and I’ve searched the world, but I found true glory in a West Texas girl”.

“Hearts On Trees” on the other hand, is in many respects a continuation of the folk stylings of his previous solo album “Belfast Confetti”. This more acoustic affords the opportunity for darker reflection,”Presbyterian Homesick Blues”, for example, concerns a nation paralysed by religion, the stunning “Tank McCulloch Saturdays” casts the singer “walking down the Newtonards Road” and “Way Too Cold For Snow” is a heartbreakingly claustrophobic examination of a broken relationship.
Many of the cuts on “Hearts On Trees” are character driven. The title track (one of a few here to feature Joe Elliot – who helped Ricky make his first solo record when times were really tough) and Schwaben Redoubt” is a wonderful duet with Jake Burns and sees two Irishmen a long way from home, but it’s “Said Samson To Goliath” that really catches the eye here, and proves if nothing else that if he’d fancied carving a career out as a singer-songwriter then Warwick could easily have been the Northern Irish Steve Earle, with “The Year Of Living Dangerously” (a song that almost shares its title with one of Earle’s) being something akin to Springsteen at his most stark and desolate.

It takes real talent to pull off a double album. Most can’t, and you end up wishing they’d made one very good record and cut out the flab. There’s none of that here. Really there’s a simple test. If they were stand alone records would they make the grade? Absolutely. Which is best? That’s tougher. Better to say that the pair together are hugely ambitious, but that ambition, whichever one of the albums you choose, it’s hard to find a single thing to fault. For Ricky Warwick these albums are a (solo) career high.