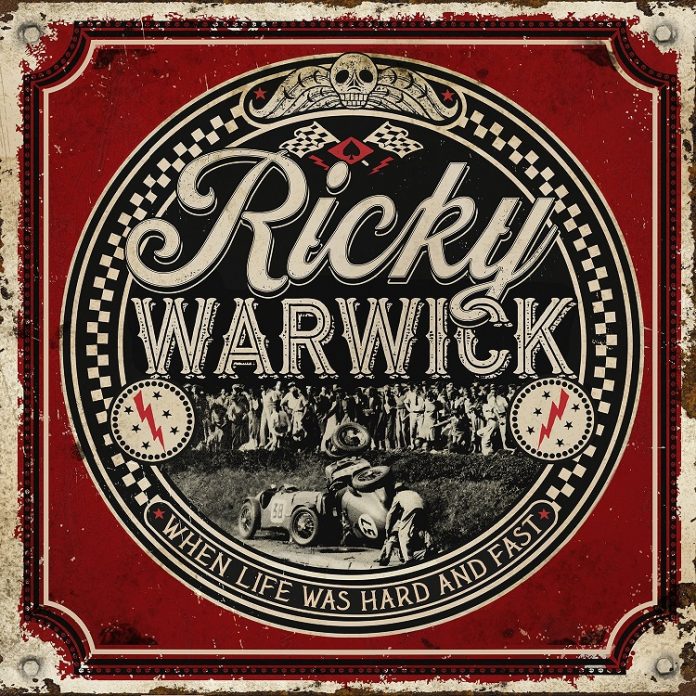 The last song on “When Life Was Hard And Fast”, starts with a phone call between Ricky Warwick and his guitarist on this latest solo record, ex Buckcherry man, Keith Nelson.

“Hey Keith,” he says in that part Irish, part US accent he has these days. “I just wanted to say, we’ve come a long way since Jerry Lee, rock n roll ain’t dead – its just lost in its mystery.”

Now, I want to believe Ricky Warwick really rings his mates up to say that, but even a man so steeped in music has that, probably made it up, but what is undeniable – and I say this as someone who has followed Warwick’s career with as much passion as I follow my football team and feels a genuine sense of pride when I see him as a rock god in the Black Star Riders – is that music has been the driving force, and probably saviour, of his life.

That song title, by the way? “You’re My Rock N Roll.” The inference is clear, here. He needs it now as much as he ever has.

Rewind to the opening track – the title cut – and it sounds like something from the incredible “When Patsy Cline Was Crazy…..” collection. It was written with his friend Sam Robinson, like those albums were, but its both personal (“how you going to keep me, right here on this farm, when I can see the road ahead. It’s tattooed on my arm”) and fantasy. “(never sleep with girls called Ruby, don’t mess with guys named Joe”) and it sounds, just a little like Eddie And The Hot Rods “Do Anything You Wanna Do”.

It sets the tone for the record in all respects. The mid-paced “You Don’t Love Me” – with Luke Morley of Thunder playing a solo to dream of – is catchy as hell, a theme that “I’d Rather Be Hit”, a neat metaphor for the modern political and social landscape carries forward. Frankly, if these hooks haven’t got in you within seconds then it isn’t the record for you.

“Gunslinger” is a little more raw, a little more punk rock. Two minutes of stuff that is a rock n roll dream in all senses, given that it is a Willy Deville song that Warwick has dreamed of covering for years, while things don’t get faster than on “Never Corner A Rat” – think latter period Almighty – and Robbie Crane (ex Ratt and current BSR man) excels on bass here.

“Time Don’t Seem To Matter” is undoubtedly the centrepiece here. A tender ballad – perhaps the most tender thing he’s ever written – about leaving his family to tour, and with his daughter Pepper singing on the track. After that, “Fighting Heart” is definitely more in the usual wheelhouse. Named after his last solo incarnation, it’s got a weather-beaten, road dog quality, that of a musical lifer with a natural sound.

If you go back to his very first solo record. “Tattoos And Alibis” – now very nearly 20 years old, staggeringly – it was one with a very singer songwriter feel. “I Don’t Feel At Home” is cut from that cloth too, Darkness Era Springsteen, muscular, but with its heart on its sleeve – its yet more proof that Warwick, would in some other life, have been a troubadour of real skill.

I haven’t really mentioned Nelson yet, but he’s in brilliant form throughout. Never better, though, than on “Still Alive” when his guitar is wonderful, and the beauty of “Clown Of Misery” with its Celtic folk flavour, is in its fragility. You feel that Warwick is busking here, and if we are allowed another Springsteen reference, then this one is definitely Nebraska.

The contrast with the aforementioned last one couldn’t be more stark – or more deliberate. But both in a way underline how important music is to Ricky Warwick, and he no doubt understands how important it is to the rest of us too. So as much as its his rock n roll, this record belongs to all of us, together.