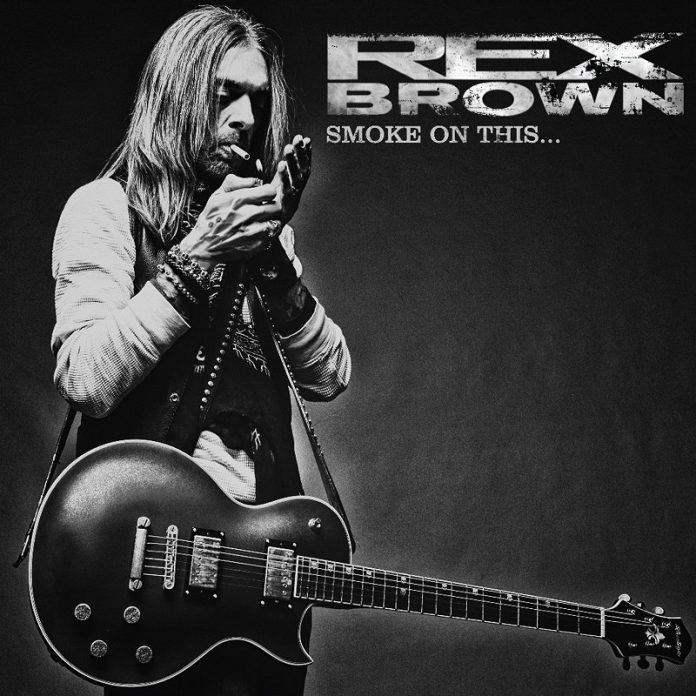 Rex, in his own words.

Pantera. Down.  Two of the best bands that have existed in the last 20 years (MV – if we are to make a confession is wearing a Down tshirt while typing this) have a bassist in common.

Yet, “Smoke On This” finds Rex Brown stepping out into the limelight as master of his destiny for the first time. And for good measure he’s singing, playing lead and rhythm guitar here (don’t worry, though, he’s also the four string player).

It starts, however, as you might expect it to. “Lone Rider” is a chunky southern rocker that finds him “rolling down the highway, moving eighteen wheels” as its first line. Equal parts Black Label Society and Lynyrd Skynryd it is a fine opener and if the rest of the record was in this vein then it’d still be superb.

Thing is that isn’t the point. “….This” is about Brown in his own words “shaking shit up”. And there is much to do.

opening to “Crossing Lines” is like a slowed down “Back In Black”, but it is “Buried Alive” that gives the first real clue that this not, perhaps, the record you imagined it would be.

Confessional and deeply personal, it deals with his reaction to the death of his friend Dimebag in the most visceral way. “ten minutes of fame, and that was fine. Yeah, it was nice. Drowning in black water I had to find me,” he almost speaks. Wonderfully evocative songwriting of the highest order, it is the first of a few to take the album to places that you might not have imagined it would go.

Indeed it is mostly split between whiskey soaked rockers like “Train Song” and those with more lofty ambition. “Get Yourself Alright” is clearly influenced by The Beatles – albeit The Beatles if they had long hair rather than mop tops. “Fault Line” is a country fried singer songwriter thing that wouldn’t be out of place on a Tom Petty album, and “What Comes Around” is a glorious chugging mid-paced ballad.

There are so many sides to this that come as a surprise. “Grace” swirls with a 70s psychedelia, for example, that when a dirty slide guitar riff like the one on “So Into You” kicks in, it is very much the exception rather than the rule.

It carries on like this right to the end too. “Best Of Me” is beyond laid back – at least initially – before waking itself only to add in a massive hook and then return to its blissed out state.

The record ends with what might have been in other hands, a ballad, but as if to prove that this is Rex Brown on his own terms, “One Of These Days” in addition manages to tie together all the loose ends on the album, and in so doing becomes a real highlight.

It is amongst many, because there is very little more prized than the ability to surprise and Rex Brown has most assuredly done that here. He’s not stopping yet either. He is, as he says, just “getting my feet wet.”

On that basis expect more tales of the unexpected sometime soon. This, however is a fine start – and you probably could have banked on that at least.