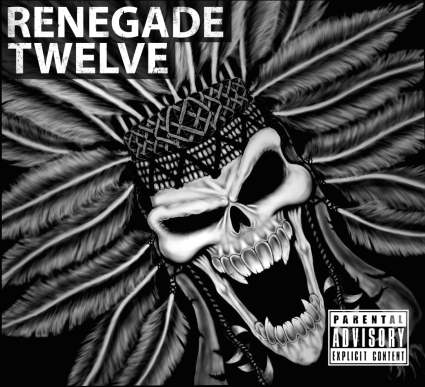 From Suffolk to an arena near you in ten years

Hats off to all those bands in the rock n roll underground who don’t take no for an answer. In an age where it’s about as likely that you could make a living at this music thing as it is that any of the Sky Sports News (female) presenters will take MV’s calls, that hasn’t stopped a whole bunch of them making ace albums.

In the North, we’ve got Jupiter Falls doing it with polish, in the Midlands we’ve got Stone Broken getting playlisted on Planet Rock by sheer virtue of having the ability and the passion to breakthrough, and over there in Suffolk it turns out they’ve got their own future arena dwellers.

Renegade Twelve evidently mean business from the off too. A little heavier, with a bit more of a clenched fist than those bands namechecked above, “Mad Max” – which kicks off this ten tracker – does so with a combination of an early Iron Maiden gallop here, an Avenged Sevenfold hook there, and a chorus that is more interested in Wembley than the local boozer. In so doing it sets the tone for the whole album.

There’s a confidence here that you can’t fake. “Vanity” knows its way around the work of Alter Bridge, “Heroes Of Mine” is even better – indeed if we had to pick a song to be the one, then its this one.

But what “Renegade Twelve” also does is seethe with an anger. Call it small town frustration, call it youthful rebellion, call it what you like, its here. Never more explicitly than on “Bipolar”. “So it’s goodbye, I hope you die” sings Sam Robson with a cheeriness that suggests he means it.

Tight as you like, too, this is a twin guitar attack without a hint of trad about it. “This Town” is another that suggests the grass is greener elsewhere, but it adds a swagger, a groove and an interesting way of delivering the lyrics.

And so it goes. You can this is a band who have played over 100 shows last year as they are brimming with ideas here. “War Plane” is big ol’ ballad. “Somme” treads the obvious path, but does it well, “Yeah Boi” is a thumping instrumental so good that we’ll just about forgive the spelling of boy and “MFC” is almost sleaze rock, and those old enough to remember Skid Row’s second record (released before these boys were born no doubt) will find much to enjoy here.

It is, though, the last song – all nine minutes of it – that suggests Renegade Twelve have a career to look forward to. “Bill And Chief” is a genuinely thrilling epic with as many peaks and troughs as most bands manage on an album. Put simply, bands on their debut ain’t meant to do this.

Modern classic rock if you will, how far this goes rather depends if the mainstream magazines stop plugging the latest American band in skinny jeans who are recycling Meshuggah’s riffs. That’s not our argument, though, that’s a different debate for a different day. All we can say is Renegade Twelve have made a fine statement.