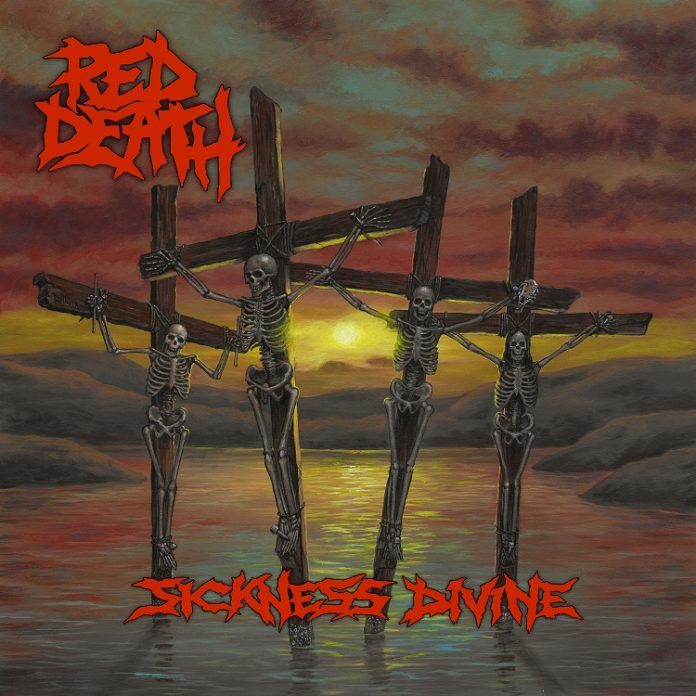 Although I try my hardest, it isn’t always easy to keep up.  Take Red Death, for example, “Sickness Divine” is the third album from the Washington DC quartet.

If, like me, you haven’t heard the other two albums, you need basically, to rectify that immediately.

Actually, let me rephrase, you do if you think this sounds like a good idea: Early Corrosion Of Conformity jamming with Discharge. If that sounds like fun to you (spoiler alert I am typing this while wearing a Corrosion of Conformity t shirt) then knock yourself out.

Sometimes, you can tell a lot by who a band has toured with, and over the course of the last year or so, RD have played shows with bands as diverse as Power Trip, Iron Reagan, Municipal Waste, Exodus, Obituary and Terror.

And there are elements of all the above here, as well as something that is entirely fresh. “Crossover Thrash” they call it, with the emphasis on the crossover. What this is, essentially, is 32 minutes of highly focussed rage.

The acoustic opening to the kick off title track is only there to sucker you in, because when it goes, boy, does it go. Moshpit ready, that’s about the size of it. Chad Tronacle (as well as being in possession of my new fave name) spits the words out like he’s got a serious beef with them.

Indeed, the general feeling of this is like when you used to love thrash metal, when it was raw, unhinged and a there was an undercurrent of violence. Not that this is strictly hi-tops and 1987. “Face The Pain” might wanna stab you up, but it does it with a metal edge. “Sword Without A Sheath” is arguably the best thing here, an absolute monstrous maelstrom of glorious chaos. If you are gonna do the Toxic Waltz make this your jam of choice.

An album that seems more like it is angry at the state of the world than overtly political, “The Sheep May Unsafely Graze” bristles with an indignation. Although the best thing about all this, is if you just wanna bang your head then do it. This is the type of album that fits whatever mood you are in.

“The Path Of Discipline” has a real energy, almost daring you to take it on, while the slower building “(Refuse To Be) Bound By Chains” in many ways is two fingers to all those thrash bands who play it safe these days, because although “….Divine” is entirely accessible, it is also supremely heavy, yet modern sounding. It is quite a feat.

Ace Mendoza and Will Wagstaff’s guitars are a big part of that. As sharp as razor’s yet as crushing as anything out there, the pair give the great twosomes a run for their money, pretty much on every song, but “Ravage” veers happily from very heavy to very techy in one go and when it beats down, man it thumps.

“Exhalation Of Decay” is eerie and foreboding to start with, but soon gets into its work, and really, its tough to think of a band that does it quite like Red Death, these days anyway.

Heavy, thrashy, yet with the rawness of punk and a desire to smash your face in, “Sickness Divine” is quite superb. The band are something of an unknown gem it seems to me. Let’s alter that, shall we?