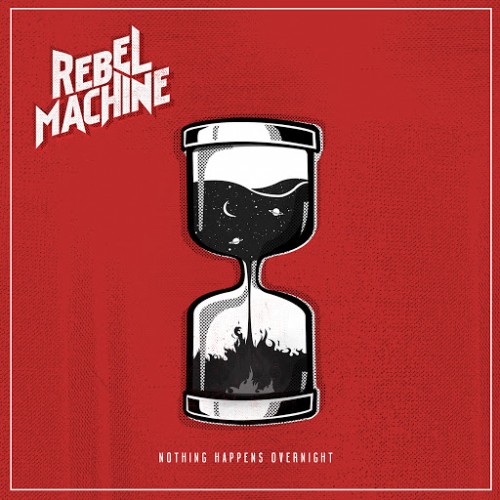 Over the course of last weekend, The Olympics started and MV found itself watching the cycling road race. Now to be honest, this is about as much as fun as a trip to the dentist, so minds start to wander.

At the same time we’d been listening to this a lot. Rebel Machine are a four piece from Porto Alegre in the Rio Grande in Brazil , and we couldn’t help but picture them turning in the in a souped-up muscle car with Motley Crue blaring and crossing the finish line before Chris Froome had chance to blink.

Because there’s a couple of lines on the third track here, “Waiting For You” which almost seem to sum up this band, but also this album: “Kiss plays on the stereo/the telephone rings” offers Marcelo Pereira “but I’m not answering/ gonna let Paul sing”.

And if we might delve into the psyche of this a little deeper, the use of Paul rather than Gene is perhaps telling too. For you see “Nothing Happens Overnight” deals with good time, ebullient, fun rock n roll – or if we look at things through the Kiss prism again, its less they love it loud, than they’d like you to c’mon and love them.

The eight songs here are full with hooks, riffs and goodness me, these boys can write a chorus. “Don’t Tell Me I’m Wrong” could have come straight off Backyard Babies’ “Stockholm Syndrome” record, and now they are off, running and ain’t about to stop. “Down The Road” is designed solely, you suspect as the soundtrack to a drunken night out – and if we may be so bold, we’d also hazard a guess that Rebel Machine have lots of them.

“It Doesn’t Matter To Me” is a million miles an hour dismissal of a girl they didn’t need anyway, while “Goodbye Honey” would, in other lesser hands, be a ballad. Rebel Machine don’t do ballads and they are better off without the bitch anyway. Everything about the song screams “its her loss, now to the bar.”

“Run Away” has a kind of bluesy thing going on, but it can’t resist a strutting suggestion that it owns the place, while “Nothing On Me” is essentially no more than a three minute 15 second statement of intent – “I love it when people tell me I am not gonna make it” sings Pereira, we wouldn’t dare.

Closing with by far the longest and perhaps most ambitious song, “Life Is Fucking Good” gives them the chance to experiment with a swinging bassline and a mighty groove, which they – like with everything else they try on this record – pull off with ease and no little aplomb.

If you long for the rock n roll of late 1990s, which saw bands like The Hellacopters, the aforementioned Backyard Babies and countless others rule the planet, but also you would quite like that to be given a fresh twist, then Rebel Machine are the boys for you. And, whichever way you look at it, that’s a damn sight more exciting than a cycling road race.