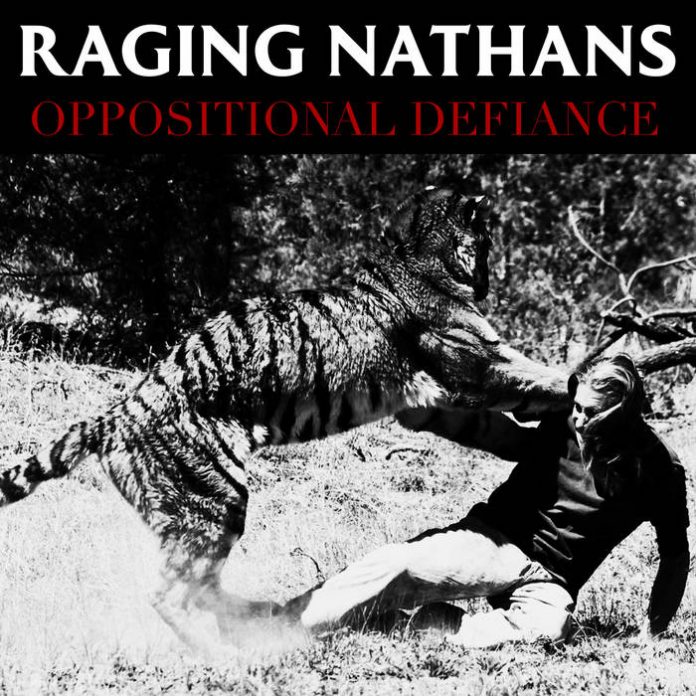 There’s always been a lot to like about Raging Nathans – not least they sound like one of those Epitaph Punk bands from the late 90s without sounding like a copy of Bad Religion. But even allowing for that, its impossible to resist this:

Their Bandcamp Page contains arguably the greatest line in the history of these things: “Voted #2 Punk Band in Dayton Ohio” it says “by some website or other.”

You can only conclude  that me and Raging Nathans would have plenty in common, because they understand the absurdity of this too. They – and me  – understand that it makes no difference to them whether I like this or not, as with “Oppositional Defiance” they have taken a massive leap forward. And that surely, is all that matters here.

Beginning with the news coverage of a mass shooting in their home town (that’s all that “Tragedy Ghouls: An Introduction” is)  and condemning – I am guessing – the culture of revelling in misery and thinking the worlds problems can be saved by a hashtag.

If that immediately puts this in a darker place than many of their contemporaries then “One Day Closer (To Death)” underlines that. “Everyday I’m alive,” sings Josh Goldman “is one day closer to death.” But the true skill here is that it actually sounds happy about it. The record is recorded by Matt Yonker (Less Than Jake) and it has a kind of pop punk aesthetic – the harmonies on “Where Ya Been?” are summery and shining glam rock for sure – but it sounds like no one.

And that’s due to the fabulous darkness here. “Don’t Miss The Train” is a real highlight, because it sounds like a punk rock Status Quo (and I know no one in the US knows who they are, but tough) but the first line talks about “licking blood off my skin” and that’s the juxtaposition here.

Add to that the guitar lines that Goldman and Nick Hamby find are always interesting and it makes for an anything goes feel. “Parole Violation” is so heavy and fast that the likes of Agnostic Front and Cro-Mags are looking on enviously (actually more like that Messrs Miret and Flanagan would love it so much they’d just get in the moshpit, frankly).

Songs, hooks and solos come at you in a blur. “Signals” is an unrequited love one, that’s cool, “Outside” is supercharged glam rock, and “You Are Not Me” has such a 90s feel that I feel like dusting off my old Offspring albums. But whatever they do, they stick in your head.

Drummer Patrick Cost thunders his way through “Big Mouth” which has a timeless quality about it, and there’s little doubt RN’s record collection is full of stuff that sounds like this. Where this changes from previously is the thumping bass from Christian Roerig on “Stargazing” gives it real meat, and the words: “I did push ups and sit ups today because I am thinking ahead, I did cocaine and pills today because I am always looking behind” perhaps show the crossroads they face. A desire for one thing, but falling back on the other.

“Old Blood” is the most “punk rock” maelstrom here, although it is noticeable that even here, the harmonies are to the fore, “Spoiled Brat” takes the entitled to task, “It’s not funny ma, its all been done before” is the simple refrain. Thing is, when you’re faced with that, you can either mope around or do what Raging Nathans have done here. Make something new out of it.

I don’t do end of year polls and all that type of self-congratulatory ego trip, they’ll never find out whether they are the second best band in Dayton in my opinion or not, and you know what? I reckon they’ll respect that. That’s “Oppositional Defiance”. The fightback. It’s Raging Nathan’s best record, a real cracker.