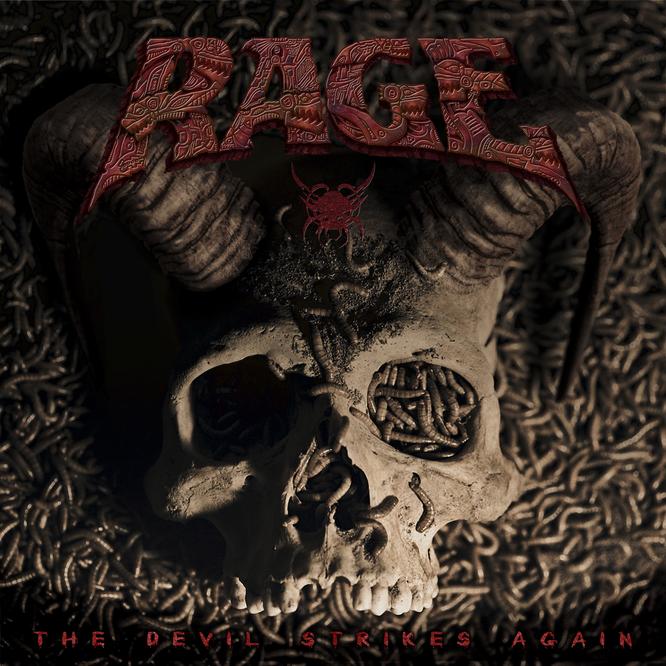 Horns up, Peavy’s back again

In this era of bullshit sub genres, post this, core that and fusion the other, it is beyond gratifying that there are bands out there that simply want to play the purest form of the music there is.

Rage, ladies and gents, only want to do one thing. Play Heavy Metal. And play it now.

This will come at precisely no shock whatsoever to those who have followed their career over the last 30 odd and over countless albums and line ups, but after the “My Way” EP earlier this year – which acted as a taster for this, effectively – there was a suspicion that they were getting their mojo back. The full length record here proves it beyond all reasonable doubt.

For this record they have another new line up, with “Peavy” Wagner – the band’s only constant throughout the years – joined by Marcos Rodriguez on guitars and Vassilios “Lucky” Maniatopoulos  on drums, and MV’s rule of thumb that all three piece bands rule is not about to be disproved at any point here.

The title track kicks things off with something approaching a murderous intent, and the riffs just keep coming, “My Way? Mixes acoustic passages with a good old fashioned gallop and gives Saxon a nudge on its way past, “Back On Track” puts us straight into power metal territory and shows Dragonforce a clean pair of heels while its about it, but these are just three fine songs on a record with barely a weak point.

At its best when it mixes a clenched fist with a soaring chorus, as on “The Final Curtain”, although the swirling double kick drums on “War” give that a strident start, before it settles for just seething and “Deaf, Dumb And Blind” would have been a massive hit single in the 1980s, no doubt accompanied by one of those quasi-live videos where everyone wore spandex like on “Run To The Hills”.

Brilliantly, there’s a real Priest type fists in the air one too, with the magnificent “Spirits Of The Night” and if “Times Of Darkness” is a touch more monolithic in its intention, it doesn’t mean that its blows aren’t bang on target throughout.

“The Devil Rides Again” even has the decency to go out as it came in. It dies with its boots on and with its shield proudly held up, “The Dark Side Of The Run” might have lyrics that reflect real pain and introspection, but it covers them in a totally unapologetic metal thump.

That applies to the not just this song, but rather the whole record. Proof positive that the Devil, well, he’s always had the best tunes.