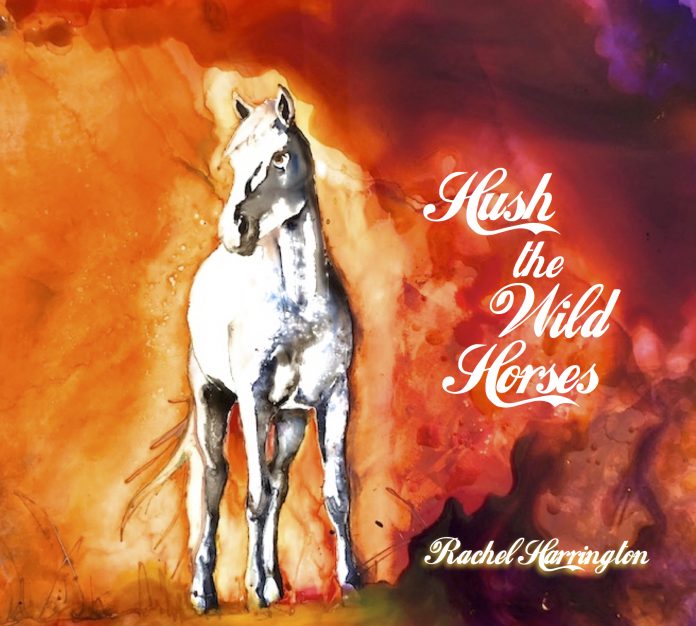 Once flaunted as the hardest working woman in Americana, Rachel Harrington decided to take a break from touring and found she’d been severely anaemic for years without knowing it and had several underlying medical issues. It took a couple of years to discover the root of her problems, resolve them and finally regain her heath and desire to return to music. A lot happens in nearly eight years and out of this period came the roots of her latest release “Hush The Wild Horses”

The opening title track is simply structured but so effective. It seems to relate to finding her former love and this relationship appears to be a calming influence on her, with lyrics such as “You laid down in my bed and you hushed the wild horses, in my head” The song is fleshed out with some wonderful fiddle work throughout. `Child Of God` is a song expressed in a field-holler gospel-blues vocal style, that is usually sung by enslaved African (and later African Americans) to accompany their work, to communicate usefully, or to vent feelings. This certainly does that, relating the harrowing time Rachel experienced a sexual assault at the age of eight. A compellingly addictive tune relating a tale that is uncomfortable to listen to. Some nice fingerpicking guitar lays down the foundation for the song `I Meant To Go To Memphis` whose lyrics relate the artists travels and struggles with addiction.

The Vietnam war had a profound effect on many American families including the Harrington household and features in two of the album tracks. The first `The Barn` written for Rachel`s mother, about her mother’s long-ago high school love who was killed in service during the conflict. The later, `Mekong Delta` is about Rachel`s deceased uncle. He was a Vietnam vet, who committed suicide after returning from the war. We get the melancholic `Drinking About You` with some outstanding pedal steel guitar. `Drop Zone` is a more up-tempo rockabilly-styled offering which takes its lyrics from Army marching cadences. The tender `Susanna` is co-written with Rachel`s son and is a tribute to the late Guy Clark, one of her song writing heroes. The song takes its name from Clark’s wife, who preceded him in death by a few years. The atmospheric `Save Yourself` is written about Rachel`s meth-addicted homeless brother and you can almost feel the heartache and pain in vocal delivery. I really loved `Get Out While You Still Can`, from the opening bars of a strummed guitar before the vocals float in, to it`s almost autobiographical lyrics. A truly delightful song. `If Wishes Were Horses` closes out this release and it`s a casual laid-back piece with some lyrical analogy. It would be remiss not to mention the talented musicians that played on this album. Lloyd Maines (Dixie Chicks, Richard Buckner) on pedal steel and slide, Eamon McLoughlin (Emmylou, R. Crowell) on fiddle, Danny Barnes on banjo, with Laura Veirs and Shelley Short (Neko Case) on harmonies.

Eugene, Oregon has proved to be very cathartic for Rachel and has helped her not only to regain her health and energy but also her musical desire and this time has allowed her to acquire a brilliant assortment of songs. This is a superb collection of tunes where nothing in her life seems to be off limits, there are some really distressing and thought-provoking lyrics, in which her life is almost laid bare.

It`s a marvellous album and I can only hope it enjoys the success it so richly deserves.