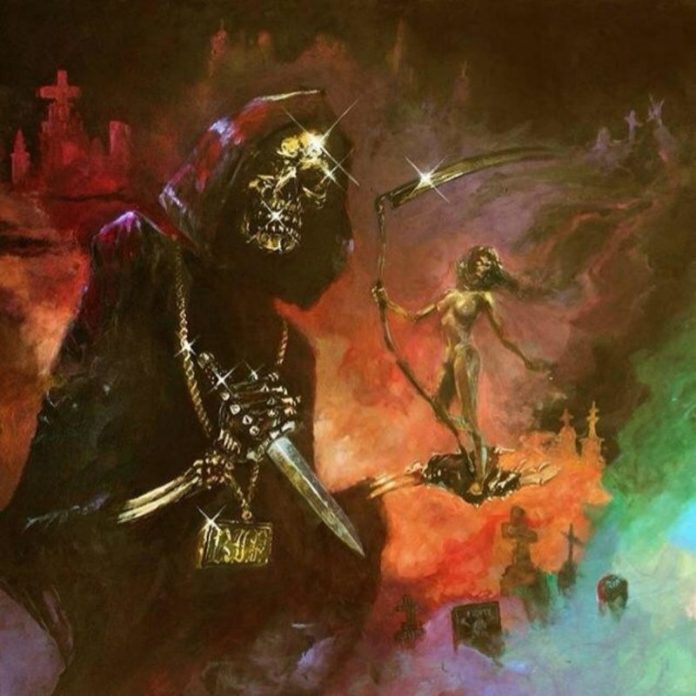 So good they released it twice…….

Originally released earlier this year, “In The Wind” was the new album from self-proclaimed “Street Doom” band, R.I.P, who furthermore they reasoned that “heavy metal didn’t come from the forest or beam down from outer space, but rather that it crawled up out of the sewer and writhed to life in the grit and grime of the streets”.

It is therefore beholden on MV to stick up for the people that invented heavy metal in the streets about five miles from where this review is being written (so yeah, take that America….) but basically, to sum up the R.I.P sound and what “Street Doom” actually is, imagine if Ozzy was in his drinking days, and he’d bit the head of a bat and pissed up the Alamo then fancied getting really rowdy – this would do as his soundtrack.

Or put another way, if Motorhead had Doom and added vocals with a genuine metal sense of foreboding, then hello R.I.P.

Actually more sophisticated than the knuckle dragging stuff lets on – the title track is in three parts for example, each one showing a different side to the band – “In The Wind” is a mighty fine slab of riff based dirt, with the accent on the metal as much as the doom.

Less guttural than their near neighbours Dopethrone and more switched on to melody and light and shade, “Tremble” is a fine melding of fuzzed up guitar and scary sounding lyrics – all clean, there is just something ghostly about the delivery. “Black Leather” is monolithic and mighty, and “Smoke And Lightning” is the a trawl through the darkest corners where “my brains are full of powder, my veins are full of dope”. This is not the sort of track that the family plays on Christmas morning (although given that at one point they claim to be “higher than God” it does at least have some religious connotations…..)

A strangely charming collection, R.I.P could, if they had wanted, gone down the Kyuss, desert type rock route “Bereaved” isn’t too far removed from that, musically at least, it is more that the four piece didn’t want to follow anyone else.

Even the instrumental “Tombstone” is scary. There is a sense throughout that something is lurking here in the darkness, something unpleasant that could most probably torture you, film it and put it on YouTube, and if “Brave In The Grave” knows its way around the Sabbath back catalogue then that supposes such a thing is a bad idea.

Ever likely they released it twice, “In The Wind” simply will not die. If Donald Trump causes the Nuclear Holocaust he looks likely to when he offers Kim Jong-un out for a fight on his first day in The White House, then the next day the cockroaches will be dancing as this plays.