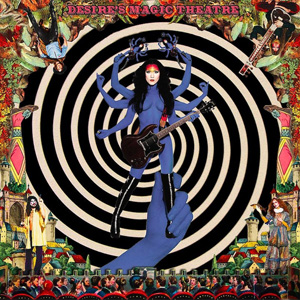 Consider just for a few seconds what the hell this might mean: “Big Psych, Facemelter, Fuzz Wowowpopsong, Other.”

Then consider how cool it would be to have a band call the track “Electric Landlady” which also suggests in one its verses: “if her cosmic boiler is on the blink, her psychic spanner is out before you can think.”

To be honest, if that band didn’t exist, then someone would have to invent them. Lucky for us, then, that they are primed, ready and right here. Ladies and gents, welcome to the barmy world of Purson.

“Desire’s Magic Theatre” is the follow up to “The Circle And The Blue Door” album and has been delayed slightly from its original planned release date. This in a way has been a good thing, given that the band are already touring the new songs, so there’s a familiar feel to the record even ahead of its official outing.

It begins as it means to go on. The title track kicks off with a glam rock stomp, ends with a crescendo, and does everything else in between including contain the mind bending thought “would you tell my brother’s sister, just how much I really miss her.” By the way, considering the next song is the aforementioned “….Landlady” it just gets barmier from there.

The album owes just as much to jazz and blues as it does to rock or psych. Occasionally – as on “Dead Dodo Down” they just chuck the whole thing in a big melting pot and it all works.

“Pedigree Chums” – title notwithstanding one of the more conventional songs here – is taken to the next level by its fine saxophone solo, “Sky Parade” is full of acoustic menace and swirling organ, while proof positive that you can’t quite ever get a handle on what they are going to do next is shown amply on the psychedelic “The Window Cleaner”.

As it was in the recent live show that MV saw, the undoubted star of this particular show is Rosalie Cunningham, the frontwoman and driving force of the outfit, her performance throughout is spectacular, as she’s able to take what is on the face of it a shimmering song like “The Way It Is” and give it a little something extra – the summer of love wrapped up in a knuckle duster, if you will – and when she and the band really let themselves go as on “Mr. Howard” the effect is rather akin to T-Rex on an acid trip.

Ending with its longest song “The Bitter Suite”, a piece which allows everyone involved to stretch themselves and take as many wilful forays as they choose and at times sounds like the soundtrack to the most incomprehensible film you can imagine, is a masterstroke given that even for this record it causes heads to be scratched as we wonder what just happened. In that respect it’s a wonderful metaphor for “…..Theatre” as a whole.

A superb collection, but it’s one that takes so many twists and turns into the unhinged environment it inhabits that it requires time to be invested in it – once it has revealed all its tricks “Desire’s Magic Theatre” is a performance to demand an encore.