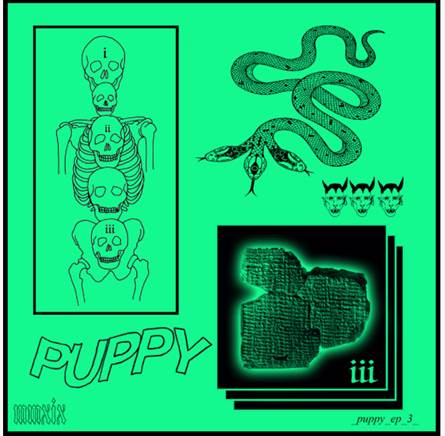 I am typing this in a room in which CD’s and vinyl are everywhere. And yet I am listening to “iii” digitally.

That dichotomy is all over modern music.

And some of my favourite artists saved their best for standalone songs or b-sides.

So, its gratified me more than you’ll ever know that bands still do that. Ok, at the moment “iii” is digital only, but its rooted in the same spirit as those greats.

Some backstory may be required.

Puppy, back in January, released an album called “The Goat”. I reviewed it in the first week of the year and promptly declared that if it wasn’t the album of the year, then there wasn’t going to be many better.

To be honest, if I’d made an album that good, I might have been inclined to get a t-shirt made up which said “I am a genius”, and rested on my laurels for longer than it took GnR to make “Chinese Democracy”. Thank goodness, then Jock, Will & Billy aren’t like me.

Because they went off and recorded these eight. Six full length tracks and a couple of interludes, which build on “The Goat” and carry on in their own sweet path. Like all the best singles did.

Add to that, what is truly brilliant about Puppy is that whilst I can talk about bands like The Wildhearts, Silver Sun even, a bit of Mansun, and loads of others. They sound like no one. They are just Puppy.

A massive, thick riff ushers in “Powder Blue”, but Jock Norton has a way of singing that is unlike any other. Melodic, yet melancholy, this one will a) show you what you missed out on, if you didn’t know them or b) show you why you loved them.

Another facet to the Puppy show is that they are deceptively heavy. “Agatha” is a case in point, and the bass thumps too, far more than your normal song about being in love with the wrong girl.

There is something gloriously 90s about “Serotonin”, the sort of thing I’d have been buying 25 years back, catchier than it might appear, this is one of them that burrows it’s way in – and won’t leave.

“Charms” is the jewel here, though. It cuts loose by the end, going down some proper metal paths,, but staying true to the Puppy ethos of ripping up the rulebook by sounding laconic. “Star Of The Sea” is a slice of pop (ish) stuff, a glam flavour here and there, while “Letterbomb” waves itself in on a drumbeat that can only be described as strident, while the whole premise of the thing is just a touch unsettling.

“iii” is utterly glorious. It is nearly as good as “The Goat” and rather underlines the fact that Puppy are not just one of the most innovative bands around, they are fast becoming one of the best.