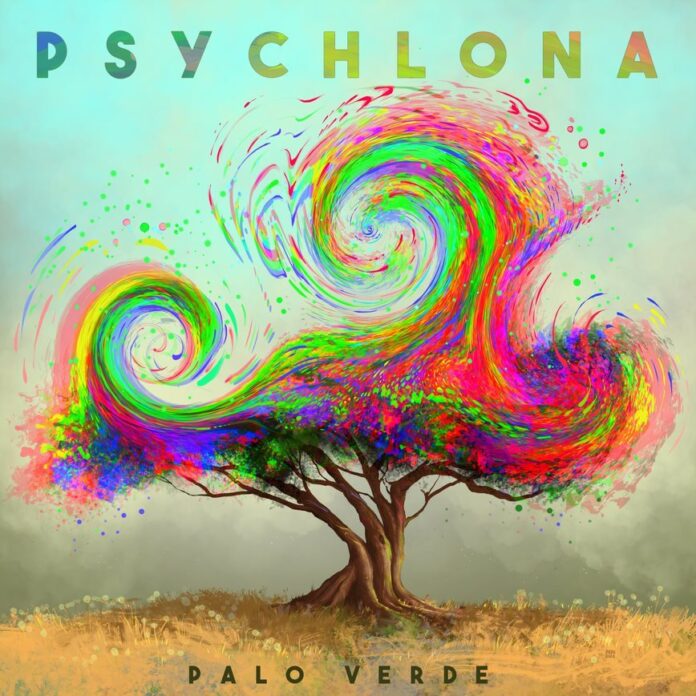 Formed in Bradford in the summer of 2016, Psychlona are one of the UK’s most coveted heavy psych rock bands. The band take their influences from punk, the Palm Desert scene and 60s/70s psychedelia. The band who comprise of Phil Hey (guitar, vocals), Dave Wainfor (guitar), Martyn Birchall (bass), and Scott Frankling (drums) have a new album `Palo Verde` released this month which follows up 2020’s `Venus Skytrip`

The album opens with `Gasoline` and it`s a pretty explosive introduction with heavy guitar riffs and a reverberating bassline with vocals floated atop. The lyrics are a little undecipherable at times but one line “Get it while you can” shines through and comes into its own at the end. There`s an almost tribal drumbeat that leads us into `1975` which this time has an almost retro doom vibe. The number becomes delightfully mesmerising as it evolves with brief instrumental curve balls along route with heavy instrumental jams and a guitar riff that has the drum and bass joining to take us on a quite sonic trip before returning us back on the path we previously left.

I read that `Rainbird` is about not taking loved ones or anything for granted as they might not be around for as long as you hope. It`s quite psychedelic, trippy and had a dreamlike quality that had me drifting off with my own thoughts and reflections. We have a more driving beat to `Meet Your Devil` which amongst the deeply heavy pulsating sound are some intricately shared guitar chords.

`Purple River` had, to me, a kind of reflective feel and moved from almost light to dark at times with some heavy pounding drums and trippy grooves. A sort of yin and yang sensibility perhaps. I was thrown a bit with `Jet Plane` which was a touch lighter or should I say maybe less heavy and had a desert rock ambiance.

`La Tolvanera` seems to translate to dust cloud and is a real slow burn that sucks you in and is beguilingly hypnotic if not hallucinogenic. The record closes out with `Warped` which is an all-out attack on your aural senses. It hurtles along with a throbbing bass line, pounding drums, shredding guitar riffs and  vocals that float in and out along its voyage.

`Palo Verde` was my introduction to Psychlona and when they said that they promised to deliver jams that will help “launch you deep into space” they certainly meant it. The band have acquired a devoted following who call themselves psychonauts and refer to the groups sound as “cosmic psychosis” which is a fair summery.

If you too want to gain some of this cosmic psychosis or at least lose a little contact with reality for a short while, give `Palo Verde` a blast and enjoy your trip, I certainly did.