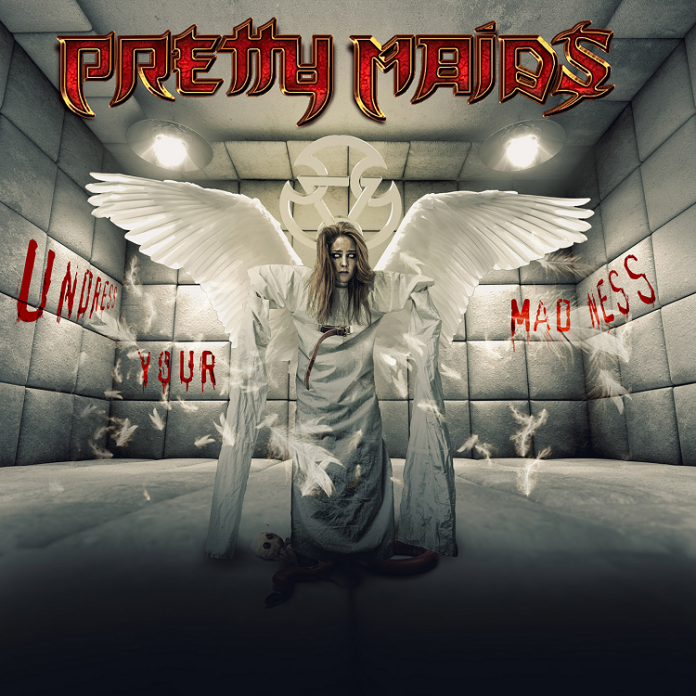 I know its deliberate, but on the press pack that comes with “Undress Your Madness”, it simply says this after the name Ronnie Atkins: Voice.

And at the risk of sounding like one of those dicks who is seeking attention on the internet, when it comes to Ronnie, when you know. You know, you know?

Until March 2016 I didn’t know. On the 8th March 2016 to be absolutely precise, I drove down to North London to watch the greatest power metal band of them all, Avantasia, play their first ever UK headline show. And, once I’d stopped boring everyone about how amazing it was, I calmed down and thought: That Ronnie Atkins was good, man. I wonder what Pretty Maids are like?

The answer – which in many ways acts like a spoiler alert for “….Madness”, is pretty damn awesome.

Make your own discovery of this as and when, but start with this, because never mind the early stuff, this thing sparkles like a gem.

As a final signpost, if you like me, are spectacularly uninformed and want a broad ballpark to operate in, if you like Magnum (and who doesn’t?) then you’ll love this.

Atkins and Ken Hammer – the two men who have been ever present since the 80s – have pulled out all the stops here it seems, and right from the intro that kicks this off, to the Beatles-ish strains of the balladic “Strength of a Rose” that ends it about three quarters of an hour later, this is special.

Working with Jacob Hansen (one of the preeminent producers of his day, and the fact he works with the godlike Volbeat gets bonus points) is indicative, perhaps that there is a modernity here, and certainly for all the purity of the melodic rock that is “Serpentine” then it doesn’t sound remotely dated.

The key, though, is in the hooks. Pick a song, any song, and they’ve all got one of rare quality. “Firesoul Fly” is about as good as it gets – and I know I’ve mentioned Bob Catley and the boys once already, but honestly, here, Tony Clarkin is looking on with a smile and a “damn, I wish that was ours….”

“….Madness” actually, is a little more “metal” as it were than most of their obvious peers. There is a heaviness to the title track and a fists up punch the air cleanness. More In Flames than you might have thought, that’s for sure.

Much of this is to do with Chris Laney’s keyboards, once in the wonderful Zan Clan, he has been in PM for three years and helps propel this to greatness.

How good is this? Well even the power ballad (and my goodness, it lives up to its grandiose title) “Will You Still Kiss Me (If I See You In Heaven)” rules, albeit for my tastes the next two, the utterly brilliant “Runaway World” and the threatening (almost) “If You Want Peace (Prepare For War)” are better. Indeed, I’ll go further, they are everything modern melodic metal should be.

There’s a touch of Dream Theater about “Slavedriver” too, and there’s just a flavour or two of FM on “Shadowlands” and if you liked the Soto record earlier in the year, then the adrenaline rush of “Black Thunder” is one for you.

“Undress Your Madness” is the 16th record of Pretty Maids’ career. Unlike many of their brothers in arms they have never had a “hiatus” or anything of the sort. And yet they still maintain the energy. “I’ll be shooting like a fireball straight in your face, I am hotwire maniac and I’ve got the ace!” sings Atkins in the aforementioned “…Thunder”, and that, in many ways seems to encapsulate the youthful exuberance here. Growing old gracefully? Oh stop. You can’t do that if you want to make one of the albums of the year. Which this is. Hands down.