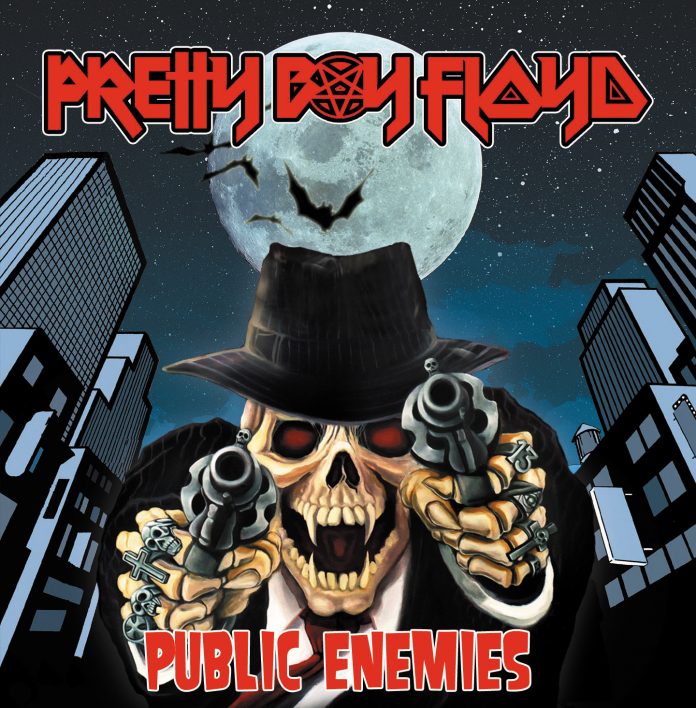 Old dogs do the old tricks and its just fine

Never the most prolific band on the planet, “Public Enemies” is (so far as we can tell, their first album of new material for 13 years, and you think they’ve changed?

Here are a couple of lines from “So Young So Bad” – the last track on this what is a mammoth (for 2017) 14 songs – “you should be home playing with your dolls, instead of here playing with my balls”.

So yeah, here’s the subtext of that. Sleaze 1 Grunge 0.

Because if this music was meant to be killed off about the second “Nevermind” came out, as all the ill-informed documentaries on the subject would have you believe, then absolutely no-one told the lads in Pretty Boy Floyd.

The first proper song on here “Feel The Heat” deals with S&M and “hot, wet dreams” all before the first solo is done and so it goes. “High School Queen” recalls Faster Pussycat, and it amounts to a three-minute knee-trembler here, and if you think calling a song – which rolls along like Tuff at their most radio friendly – “Girls All Over The World” is un-PC, then it’s highly unlikely that these boys give a fuck.

Instead they are too busy having fun on the likes of “American Dream”, which has everything that you’d want in its sassy grooves, and writing power ballads like “We Can’t Bring Back Yesterday” – with its echoes of “Never Say Goodbye.”

And that, you suspect is rather the point. No one is under the illusion that this is ground-breaking, yet in a way it is more honest than that. Instead, it is a band who couldn’t give a toss that it isn’t 1989 any more, they are damn well gonna party like it is. That’s why songs like the Van Halen-infused “We Have The Power” and “Do Ya Wanna Rock” – which neatly sums the album up in 2 minutes 58 seconds of unashamed hedonism – get made.

“Run For Your Life” is for all those who got your number from a bathroom wall, and the twin guitars here are fabulous. “Shock The World” is a fists in the air chugger of a thing, “Paint It On” likes the idea so much it repeats the dose, while the faster “Star Chaser” is a non-judgmental take on the groupie scene.

Pretty Boy Floyd, to be fair, are not in a position to judge anyone. This is about escapism, not reflection. That is a point they’ve made themselves: “ A fun record meant to be played at maximum volume to help you forget about your worries.” (we didn’t just that quote as it used the phrase “Maximum Volume”, honest) and that is all ever “Public Enemies” was ever going to be.

On their own website they can’t resist a dig: “Never mind what the critics think, or what trends may have come and gone. Having outlasted many of the critics who cried “they’ll never make it,“ Pretty Boy Floyd continues to record and tour the world,” it says.

In that context, this record is their statement of intent.