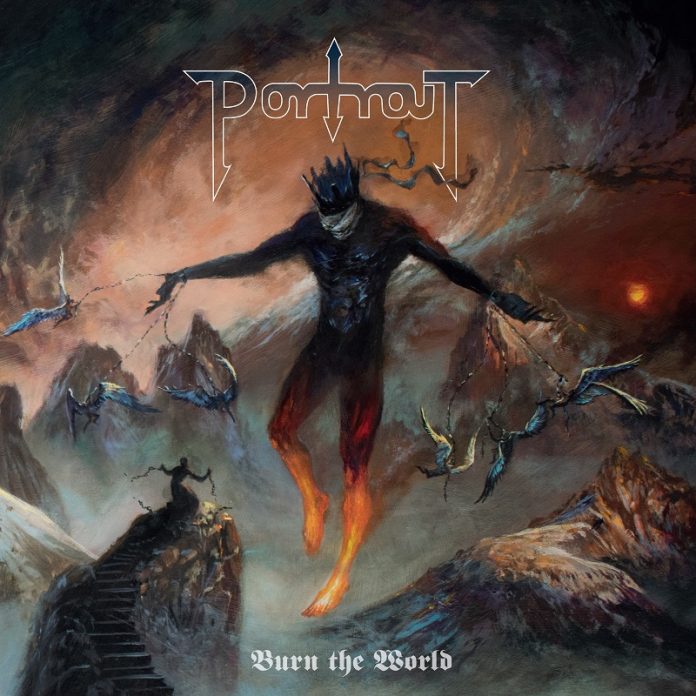 Swedish metal force do what they do best

To be fair, if you start a band over a decade ago with the premise that you want to “exterminate the world” you’d best sound just a little threatening.

Portrait did just that, and there is a fair dose of menace in “Burn The World”.

A fourth full length – there have been plenty of EPs and splits too – “… World” is the sound of the band doing what they are best at.

“Saturn Return” is an eerie intro, after which its straight into the work. Heavy metal with a slightly satanic edge, you are never quite sure what Per Lengstedt is summoning up, but you know it’s evil and you wouldn’t wish to meet it down a dark alley.

The title track is a microcosm of what the five piece do. This is resolutely metal. But the thing is that while the riffs might have more than a whiff of Maiden and Priest about them, the drumming of Anders Persson belongs more on a thrash record and Lengstedt’s incredible vocals are somewhere way beyond what even King Diamond can do.

It makes for a thrilling clenched fist ride through the gates of hell and back again. There is a pulsing throb to “Likfassna” which has a real undercurrent of violence about it, “Flaming Blood” sounds exactly like a song called “Flaming Blood” should, while “Mine To Reap” will get the studded wristbands pumping wherever it is played – and so high do the vocals get on this one that even dogs might struggle to decipher them.

“Martyrs” tones things down a touch, and whilst you’d never call it a ballad, “Burn The World” benefits from the mid-paced breather. “The Sowers Cross” too, is a shorter, sharper and more focussed boot to the balls.

Portrait are at their absolute best in the last two tracks here. First they go for the kill on “To Die For”, then – as many bands do – they end with the most epic affair on the record. “Pure Of Heart” sounds anything but as it builds into something quite superb, even if you have no idea what on earth its all about.

But the point here isn’t that you understand the songs and it definitely isn’t that you “rock n roll all night and party every day” it’s that heavy metal needs moving into new pastures by new bands. Frankly the NWOBHM came almost 40 years ago and those bands are still the best at it. Maiden and Priest, though won’t be around forever. The new breed needs to step up and put their own stamp on things. Portrait are at the forefront of those that are trying.