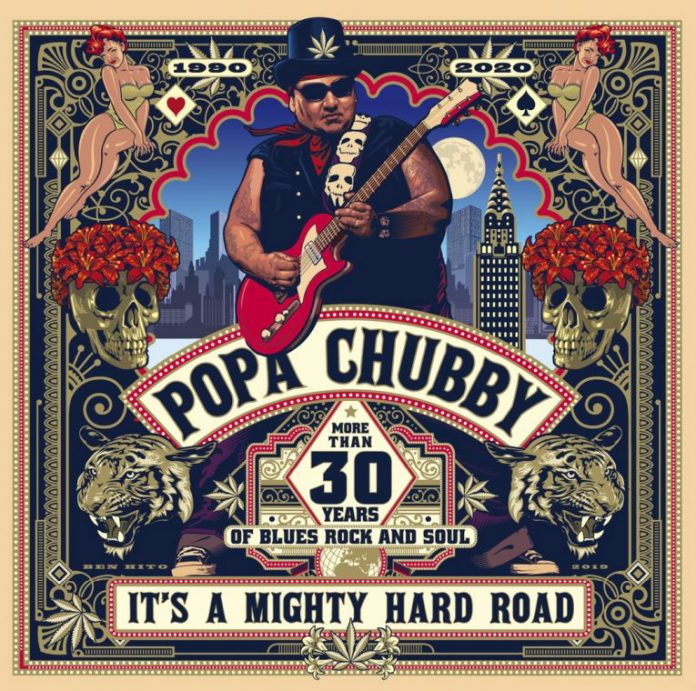 It’s something I often say to people, even to this day. “They are very different live.”

Meaning that whatever an artists records sound like, the vibe of the live show is not the same at all.

Nowhere is that better shown, I’d argue than with Popa Chubby.

I am kind of cheating a bit here, because I’ve already seen the big fella on this tour, he played a couple of songs from “It’s A Mighty Hard Road” that night too, but the fast and furious way he does things on the record – 14 songs in an hour – is at odds with the slower live show, where he really shows his skills as a guitarist.

And, let’s be frank about this too. He was in a grump that Monday night in the Black Country, here he positively crackles with energy and fun.

That is shown on the brilliant, tongue in cheek (possibly?) “The Flavour Is In The Fat” – and – with no research on this at all – I am going to say that it is the only song in recorded history to contain the lyric “don’t give me no tofu, I won’t eat that…” You suspect he’s not lying, either.

Then there’s “Buyer Beware”, a glorious slice of honky tonk blues, that rhymes “service” with “nervous” and gets bonus points as a result – but is a lament on buying things online.

And yet, the one in between – the title track – is just as much a signpost to the brilliance here. Blue collar and proudly so, it proves the band here is unstoppable when it gets it right.

“It Ain’t Nothing” has a 12 bar stomp about, but the versatility of PC is shown on the soul-fuelled “Let Love Free The Day”, which floats in on a warming breeze, seemingly totally content too.

There are many sides to “the blues” of course, and so there are many sides to Chubby. “If You’re Looking for Trouble” sounds like it really would take you outside, but then such is the class of its screeching lead break that you would let it, while “The Best Is Yet To Come” is the sort of self-help anthem I can get on board with. “living for the moment, you know you’re smoking hot, so don’t let the Devil fool you into thinking that you’re not”, he offers here, but when he lets his hair down (metaphorically, obviously) on “The Beast From The East” it seems like there isn’t a care in the world.

The Latin flavoured, Santana-esque instrumental, “Gordito” is gorgeous, and he struts his funky stuff on “Enough Is Enough” before he does something that would suit daytime radio, and somehow “More Time Making Love” (sounds like a decent idea, too) ends up being one of the highlights here.

Able to do pretty much anything, “Why You Wanna Bite My Bones?” takes the idea in the previous song and makes it a filthy little groover, while “Lost Again” adds a jazzy hue to things, and “I’d Rather Be Blind” is built round some mighty organ.

If the cover of “Kiss” just shows to me that whether you are Tom Jones, Prince or Popa Chubby, its just not a great track, then the album is rather different. That is a bit of a cracker.

Popa Chubby is 30, says the press release. Yeah, fair enough, and I am married to Kylie Minogue, but in the spirit that the character that Ted Horowitz plays is celebrating, well wish him happy birthday. This is his present to us, I guess. Just don’t give him tofu on his birthday tea for god’s sake.