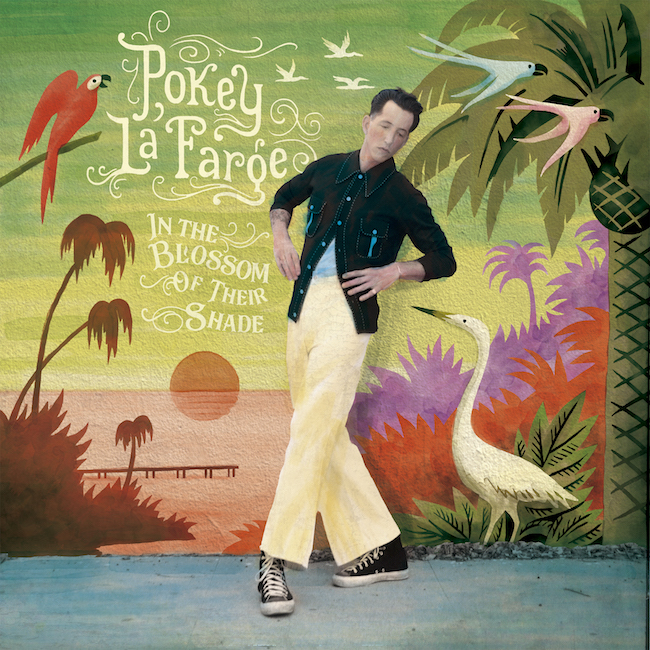 Pokey LaFarge or Andrew Heissler is an American musician, writer, and actor who has released numerous albums with hints of blues, folk, country and swing jazz. His latest album, his seventh, `In The Blossom Of Their Shade` is released this month and is thefollow up to his 2020 studio LP `Rock Bottom Rhapsody`.

The album opens with the slightly reggae tinged Americana of `Get It `Fore It`s Gone` which has a kind of retro texture and is a delightful earworm of a song that will stay with you long after it`s ended. We have a much more dreamy piece with `Mi Ideal` which seems to be partly sung in Spanish. As I have next to no Spanish I can only assume it means my ideal. The song has a wonderful laid back Caribbean / calypso like vibe.

When I heard the first bars to `Fine To Me` I felt it had hints of Sheryl Crow`s hit pop song `All I Want To Do` but as it progressed this upbeat track took on a life of its own. There are hand claps aplenty, piano twinklings, some sweet guitar riffs and captivating backing vocals in the latter stage. There`s a more laid back slow burn with `Drink Of You` a heartbreak song according to the singer which has the amusing line “All of the girls I’ve loved before Have changed their locks and closed the door” a song to sing along and wallow in the heartache.

`Rotterdam` is a loosely based tribute to the Dutch city but maybe isn`t as Pokey shares “it’s more about a place that doesn’t really exist—Rotterdam as utopia. Paired with a fair amount of confusion and frustration over how some things are in the USA, I found the lyrics to be an outlet.”

It`s another captivating listen with a rolling drumbeat but this time with surf like guitar chords sprinkled throughout. A track that wouldn`t feel out of place in a Tarantino neo-noir movie. There`s more relationship trauma with the twisting, turning `To Love Or Be Alone` which had organ refrains and tantalising tinkling keys with a kind of stop start drumbeat that gave it that sense of danger. There`s also a brief guitar solo and some harmonising vocal backing.

`Long For The Heaven I Seek ` is a gospel tinged country composition which is lyrically incredibly visual and at first listen I was waiting for the punchline but it does seem more respectful on reflection. I wasn`t sure what to make of `Killing Time` a kind of throwaway R & B offering, another piece that enjoys some glimmering piano keys and is a real foot tapper.

We seem in `Yo-Yo` to return to a more Caribbean tinged submission which relates to a relationship that seems to be flip flopping and going nowhere and now the narrator wants a definitive steer.  This release closes out with the dreamlike `Goodnight, Goodbye (Hope Not Forever) ` with its twangy guitar chords and hopeful upbeat sentiment.

There was so much to savour on `In The Blossom Of Their Shade` with its variety of musical styles and textures and Pokey`s incredibly alluring and enchanting vocal range. The joy of finding an artist who has a fairly substantial back catalogue is that there is much more for you to discover and enjoy.