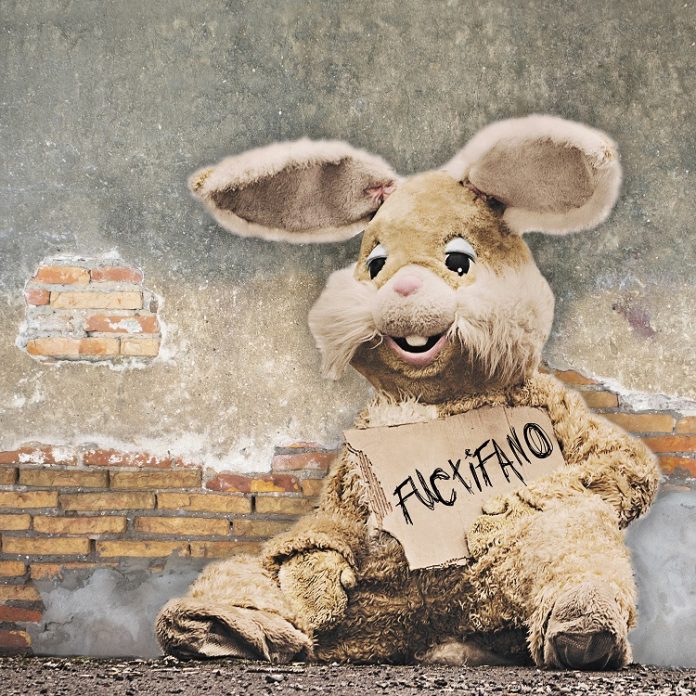 It’s weird how current events change perceptions. I have just been listening to the news on the radio and the scumbag who is the Prime Minister of the country has told the assembled press corps that he wants to “level with them” that “more families will lose loved ones before the Coronavirus is over.

Now, if I was going to make a political point here I could point out that he’s never levelled with anyone, the lying tosser, and that his own government’s austerity measures have killed 120,000, but that’d be a digression.

The point I was going to make seems a little trivial in amongst a worldwide pandemic, but nonetheless, the biggest evil we face in the world today is Facebook. I am convinced on it.

Which is why, even before the rest of “Fuctifano” has come on Peter And The Test Tube Babies had pretty much guaranteed themselves a review by having a song on the record called “Facebook Loser”. Written for the one person we all know  that wants to put their whole lives online, it should be required listening in schools (once they are open again, obviously).

The rest of PATTTB’s 15th record (if I’ve counted right, I ran out of fingers) is just as good. Peter Bywater’s and Del Greening have been doing this so long (I was seven when their debut “Pissed And Proud” came out and there was no such thing as Social Media, I call it the good old days) that they know exactly how to construct a nasty, raw, but funny punk rock album.

And “Fuctifano” is one of them.

“Hell To Pay” sneers at you, “Cydrated” – an ode to being pissed and proud, if you will – adds some horns, but by and large, this is better when it does things that others wouldn’t think of.

“Saturday Dad”, a song to the fathers who only get custody at weekends, and this isn’t some “Cats In The Cradle” sentimental thing, either. Rather, the dad here has his mates getting drunk in the pub and laughing at him while he’s “by the swings”.

“Gravy Train” is a celebration/condemnation (delete according to your personal views) to the workshy. It contains the glorious line: “Jack told Jill to get off the pill, cos benefit is our plan” and still manages to sound just a little like The Levellers.

“Ain’t Missing Her Yet” is a good old knees up. Sort of like an after-hours Chas and Dave, and lets be honest, for all the searing social commentary here, its best not to take it too seriously, although I know one or two women that might look at the lady singing “Wanker” with more than a nod of sisterhood; “Is he bi-polar?” she muses, “nah, he’s just thick”.

Pick one elsewhere, they are all fabulous. “Small Victories” could only be done a British band, “Punched Awake” has a little more melody and sounds a bit like The Professionals, “Tales Of The Bleedin’ Obvious” spits its thoughts at you, “Screwed Down” is another that adds a horn section and is much fun as a result, and if you can resist the line “I used to be a dosser, now I am a one coat glosser with my roller and tray” this might not be the record for you.

That one might be construed as something of a hymn to going old, but Peter and his Tubes only want to grow old disgracefully, as the brilliant slice of glam punk (there’s even a nod to The Sweet here) “The Queen Of Fucking Everything” proves.

As does the fact that this is bookended by “Livers Lament”. A song written from the point of view of their vital organ and its struggles. It ends with this thought: “Please pack it in, and do it quickly, cos if I go down, I am taking you with me”.

Now, you could, if you want, see that as a thought about the apocalyptic environment we live in, of climate change, pandemics, war, the marginalisation of sections of society. More likely here, its just a piss head who’s been in a punk rock band for nearly 40 years.

Nope, the world is fuct. They know it, you know it. And in 32 minutes and 40 seconds, Peter And The Test Tube Babies have managed to take a swipe at just about everybody in proving why.

And, that, right now, is all you need.